bauma 2010 has marked a turnaround in the international construction machinery industry, ushering in the hoped-for change in sentiment despite the ban on air travel which impacted the first few days of the fair.

“The mood in the industry shows that in Europe the lowest point of the cycle is now behind us. Confidence has re­turned. Of course at the start of the fair the exhibitors felt the lack of many customers from Asia and America – but in the second half of the bauma, this improved considerably.” This is how Ralf Wezel, Secretary General of CECE, the Com­mittee for European Construction Equip­ment, summed up this year´s bauma. In doing so, he confirmed the expectations of the sector as outlined by Dr Christof Kemmann, Chairman of the VDMA Construction Equipment and Building Materials Machinery Industry Association, at the main press conference for bauma 2010 on the first day of the fair.

Although the ban on air travel in Europe prevented visitors and in the end around 50 exhibitors from overseas from coming to the fair, the mood at the venue among the approximately 3150 registered exhibitors from 53 coun­tries was good by the close of the fair (Fig. 1). Already by the mid-point of the fair a number of exhibitors were reporting more sales than they had expected. The representative survey of exhibitors conducted by TNS Infratest shows that the bauma 2010, as the leading world fair, is marking a change in mood following a year of crisis in 2009, and that this change is being felt in many international markets, with few exceptions. Almost half the exhibitors are expecting the economic situation to improve. Even before the fair started, it was evident that worldwide the sector had high hopes of the leading world fair in Munich: with 555 000 m² of space, all fully booked, and 60  % of the exhibitors coming from outside Germany, the fair registered new all-time highs for the overall number of exhibitors, international participation and space booked (Fig. 2). From China, India and Turkey in particular exhibitor numbers were up strongly on the previous event.

Nevertheless, the general economic situation ahead of the bauma and the unexpected ban on air travel at the start of the fair did impact the final figures for the number of visitors: Over 415 000 visitors from more than 200 countries attended the bauma 2010. In comparison to bauma 2007, this was 17 % fewer. 65  % of the visitors came from Germany, 35  % travelled from countries outside Germany. “Despite the many emergency measures implemented by the Messe München, in cooperation with its employees in Munich and the international sales and association partners, in the second half of the running time – which usually sees more visitors – not all of the expected visitors from Asia, India and America were able to get to the leading world fair bauma in Munich,” said Klaus Dittrich, Chairman & CEO of Messe München GmbH. bauma 2010 has once gain lived up to its reputation as the world´s leading trade fair for the sector, in presenting a wealth of innovations (Figs. 3 and 4): “Never before have there been so many innovations on display in terms of sustainability and environmental and human protection. Despite the economic crisis and the ash cloud, bauma remains the uncontested Number One,” confirmed Dr Reinhold Festge, Managing Partner, Haver & Boecker, Germany. 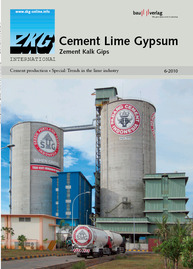 bauma China 2010 has again broken all records with regard to exhibition space, exhibitor numbers and visitor numbers. Once more, bauma China has further consolidated its position as the leading trade...

Five months before the start of the trade fair for construction machinery, bauma, on 08.04.2019, Messe München can already announce a new record number of exhibitors: More than 3500 exhibitors from...

bauma booked to capacity once again