Something is on the move in the world. The effects of the global crisis had hardly begun to subside, when the European economic and financial crisis required European and international measures. This type of approach is also required in another field. The Guardian writes that the emissions of greenhouse gases harmful to the climate, including CO2, reached a new record high last year. The article refers to data from the IEA (International Energy Agency, www.iea.org). With 30.6 Gt of CO2, the values increased by 1.6 Gt as compared to 2009. In addition to China, the USA and Russia, India is also among the top 10 emitters. This year the cement industry is looking at India, because the NCB Seminar will be on the agenda in New Delhi from 15. to 18. November 2011. This event takes place every two years. According to a “strong growth” scenario described by the IEA, cement production could grow to more than 1.5 billion tons in India by 2050. “Normal” scenarios estimate about 700 million tons in 2050 depending on the demand. A large portion of the production in India, i.e. the high-capacity plants, is very efficient and above the worldwide average for plant efficiency. Only smaller plants still have a certain potential for optimization. It is clear that further optimization could only be achieved by means of new types of cements, alternative raw materials and fuels, alternative energy sources as well as other measures, such as CCS (Carbon Capture and Storage). However, particularly the latter measure is currently the subject of controversial debate in Germany, since there is a certain need for coordination in the public perception. Thus, the discussion about possible measures for sustainable industrial development seems to be on the move too. And this is a good thing, isn’t it?

ZKG 100 YEARS OF EXPERIENCE – Accompany us into the future! 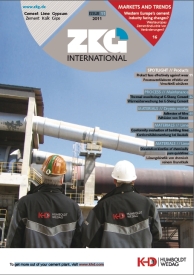 July 2016 symbolizes a historic period for Loesche India Pvt. Ltd., as in this month the company has bagged its first ever order in Nepal. With this move, the company has set foot in a country where...

New cement blend to cut CO2 emissions by up to 30?%