After only ten working days the bucket-elevator on the No. 8 cement mill at Märker Zement in Harburg/­Germany was recommissioned (Fig. 1). Despite difficult space constraints the rebuild was completed in record time. As part of this, the location of the bucket-elevator in the centre of the mill building proved to be a great hindrance. As the roof of the building could not be opened, access from above was not possible. For this reason all necessary parts for the central chain bucket-elevator (type BW-Z) were raised almost 27 m in height through the chimney. This also applied to the bucket-elevator head. It was prefabricated in individual sections and was at first mounted on the working platform and then welded together. “Despite numerous bucket-elevator rebuilds it was still not an everyday event for us”, reported Peter Müller who, as Aumund’s project leader, was in charge of the conversion. “Usually we can reuse the existing bucket-elevator head”.

The rebuild of the central discharge bucket-elevator had been necessary as spare parts were no longer available, reports Märker project leader Franz Ferber. “In addition we were interested in more flexibility. If the capacity of mill no. 8 should be increased the bucket-elevator must be in a position to accommodate the increasing conveying volumes. This is now the case.”

Also the question of economy played a role as rebuilds are often an interesting alternative to a newbuild. In this way the existing steel structure can largely be reutilised. That reduces material costs by 30 % compared to a newbuild. Also assembly is less complex meaning downtime is, as a rule, significantly shorter. “These are very often good arguments for a rebuild,” reports Müller.

As is often the case with older installations there were no longer any drawings for this bucket-elevator either. Therefore all relevant data and measurements were recorded with the help of electronic data capture, photos and sketches in order to be able to create a design drawing on this basis (Fig. 2).

The electric power consumption of the bucket elevator was lowered by around 5 %. The main reason for this is the conversion from scooping to direct filling of the buckets. In addition the inlet was slightly raised and its angle changed to 45 degrees. The both desirable and pleasing side effect is significantly lower maintenance costs. For the central chain concept and direct loading reduce the wear on the buckets, on the circulating parts and on the drive. 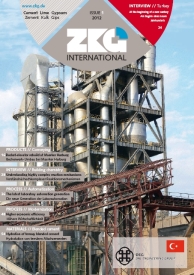 The cement manufacturers PT Semen Tonasa and Gresik rely on BEUMER bucket elevators (Fig.) and are providing their plants in Tonasa and Tuban/Indonesia with one kiln line each. BEUMER was awarded the...

The Turkish Çimsa Cimento ordered 24 Aumund machines for the mill at Çimsa. Parts of the order are 18 deep drawn pan conveyors, five bucket elevators with central chain and a pivoting pan conveyor....

In the cement industry and in mining, increasingly higher vertical conveying capacities are required. Bucket elevators, which distinguish themselves by high reliability and long service life, are...

With the technical improvement of the rotary kiln at the Oman Cement Company (OCC) over recent years, the inadequate performance of the existing bucket elevator was initially recognized in 2016. The...

Yamama Saudi Cement Company, one of the biggest cement producers in Saudi Arabia, will start up two turnkey clinker production lines in 2018 at a new site to the south west of the capital city,...