The 3rd International Symposium dealing with the topic of ultra high performance concrete (UHPC) took place in Kassel under the name “HiPerMat 2012” from 7 to 9 March 2012. About 260 scientists, engineers, users and commercial exhibitors from 28 countries met to exchange ideas as regards UHPC in construction engineering and to present the latest research results (Fig. 1). The symposium was organised by the departements “Structural Materials and Construction Chemistry” as well as “Structural Concrete” of ­Kassel University.

The organizers of the conference dared to extend the spectrum of the event, which already has become established as central research platform of the branch as regards the topic UHPC, and to deal with the possibilities, influences and potentials of nanotechnology for construction engineering in more detail. The community of researchers expects new findings from this scientific trend in the next few years. Thus, in addition to UHPC, the lectures and discussions dealt with topics such as photocatalysis, particle synthesis and use as well as dispersion methods. The new name of the conference reflects this extended range: “HiPerMat – High Performance Materials in Construction”.

The areas of UHPC have expanded greatly in recent years: In addition to the bridge and Tragwerksbau, who was previously the focus on, now it’s discussed to use it as bearings, in machine foundations, as cast iron replacement, and even as drill material. Repair works with UHPC are also being considered as the protection of buildings against aircraft impact (Fig. 2). In this context, the participants had the opportunity to discuss some experience in dealing with UHPC. The French star architect Rudy ­Ricciotti (Bandol/France) presented some of his designs with UHPC including also the MuCEM Museum in Marseille which is still being set up. Renowned experts rounded off the event, among them Prof. Antoine ­Naaman (Ann Arbor/USA) who presented a historical survey of the development of UHPC or Prof. Surendra Shah (Evanston/USA) (Fig. 3), who imparted an insight into the use of nanoparticles in cement-based systems.

This year’s symposium concluded the priority program of the German Research Society “Sustainable construction with UHPC”, which was started in 2005 and which was coordinated by Prof. Michael Schmidt from Kassel University. Therefore, many representatives of the research groups spread out over whole Germany presented the results of their partial projects in Kassel. The joint examination of the many individual aspects during the last few years results in comprehensive knowledge concerning UHPC, which, not least, can also be used to support the process of standardization of UHPC and thus to open up the way for a wide use of the high performance building material.

At present, the Féderation Intérnationale du Béton (fib) is drawing up comprehensive regulatory provisions to impart the required knowledge as regards the use of UHPC for designers, architects and engineers.

During the conference it became clear that nanotechnology in construction engineering as a newly included topic was well accepted. A delegation from the Shanghai University in China also took part in the event. This university has already been cooperating with the Center for Interdisciplinary Nanostructure Sciences and Technology (CINSaT) in Kassel for some time. The delegates agreed with representatives from the Kassel University to cooperate closer as regards the joint research in construction engineering. 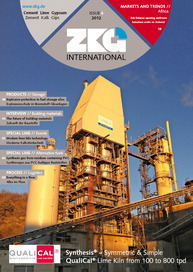 UHPC and Nanotech for construction materials

Welcome to ibausil, the 20th International Conference on Building Materials in Weimar

For the 20th time now, both researchers and engineers working in the industry will be meeting up in Weimar for the ibausil. Focus of this years conference is again traditionally the presentation of...

On 19.09.-20.09.2016, more than 60 recycling specialists from teaching, research and industry met for the Recycling Conference in Weimar. At the now eighth conference in this series established in...

The CCS Conference (TCCS-10) will gather 500 international carbon capture and storage (CCS) researchers, industry representatives and policy makers in Trondheim/Norway on 17.06.-19.06.2019. TCCS-10 is...