The sense of heading for new horizons is really in the air. “We had so much struggle. Let us now watch out that our children do not need to suffer any more”, the statement of John Okumo from the Uganda National Bureau of Standards made during a kick-off workshop of an ­African Round Robin test for cement testing contains a lot of confidence. Justifiably, since oil deposits and other deposits of valuable raw material are being developed in many African countries at present. Prosperity is growing and it seems as if the prosperity finally will also be of benefit to the local population and, consequently, at last to the building sector. Currently, building materials testing and quality control are outstanding topics across the whole continent since the quality requirements are high. Africa is stabilizing and renewing, and the upswing is noticeable everywhere. In addition to a never-ending traffic jam, construction sites fill every free gap and mark the landscape of Dar es Salaam, the seat of government of Tanzania, where workshops for young academics and building materials laboratories of the cement and concrete sector took place from 2 to 6 July 2012.

Within the framework of the SPIN Project
(www.spin.bam.de), Nsesheye Susan Msinjili, Dr. ­Gregor Gluth and Wolfram Schmidt, members of the Department 7 of the BAM Federal Institute for Materials Research and Testing, first went to Zanzibar on 30 June and then to Dar es Salaam to give courses together with other ­scientists from various African countries for ­future master and PhD students from universities of East, South and Central Africa (Fig. 1) and to head the kick-off workshop for an Africa-wide Round Robin test for cement testing in cooperation with the ­German ­National Metrology Institute PTB (­Physikalisch-­Technische ­Bundesanstalt).

Cement and concrete conference in Africa

In Zanzibar they visited a building repair within the framework of the SPIN Project and discussed plans for the conference “Advances in Cement and Concrete Technology in Africa” that will take place in January 2013 (www.accta2013.com). An estimated 300 visitors from more than 40 nations will attend the international conference in Johannesburg, which will essentially be organized by the BAM und the South African University of the Witwatersrand.

Then a two-day training program took place at the university of Dar es Salaam for master students and doctoral candidates from Tanzania, Rwanda, Uganda, ­Burundi, the Democratic Republic of Congo, South ­Africa and Mozambique. Prof. Mrema (University of Dar es Salaam) opened the program with a lecture on alternative cementitious materials. Then followed Wolfram Schmidt’s lecture on the basics of rheology and the contribution of the building materials chemistry to innovations in the concrete sector. The next lecture given by Ryan Bradley (University of the ­Witwatersrand) dealt with the influence of wind loads on shell structures. A lecture on application rules for shotcrete construction was given by Prof. Regina ­Stratmann-Albert (Darmstadt Advanced Technical ­College) who took part in the courses as guest speaker. Finally, Wolfram Schmidt conducted a laboratory workshop (Fig. 2) during which the students were introduced to issues of the optimization of the packing density as well as to the mode of action of polycarboxylate ethers and polysaccharides to control the rheology of the concrete based on practical tests.

The second day started with Dr. John Makunza (­University of Dar es Salaam) who talked about the design and loading assumptions of bridges. Then followed a short lecture given by Akindehinde Ayotunde ­Akindahunsi (University of the Witwatersrand) on the use of starch in cement-bound systems. This is a topic that is currently investigated in cooperation with the BAM. The program was continued with a lecture given by Prof. Herbert Uzoegbo (University of the ­Witwatersrand) covering the difference between earthquakes caused by tectonics and such caused by underground blasting in mining. Then Prof. Mitchell Gohnert (University of the Witwatersrand) put a provocative question as regards the physical existence of shear stresses and he explained why concrete components almost exclusively fail to tension. Then Renato Rajzer (Civil Engineering Institute of Croatia) talked about standard regulations for quality assurance during site operation. All topics were welcomed by the students with enthusiasm and great interest.

Round Robin test for cement testing

During the next two days, a kick-off workshop for an interlaboratory comparison took place with participants from all regions of Africa to test cement according to the standard series EN 196 (Fig. 3). The scope of the interlaboratory comparison is something new for the African continent. Altogether 27 building material testing laboratories took part from the following 20 countries: Algeria, Ethiopia, Botswana, Burundi, Democratic Republic of Congo, Germany, Ghana, ­Kenya, Croatia, Mauritius, Mozambique, Namibia, Nigeria, Rwanda, Senegal, Sierra Leone, Zimbabwe, South Africa, Tanzania and Uganda. The participating laboratories are part of universities, government and private testing institutes, of the industry as well as of national standardization offices (Fig. 4). The Round Robin test  is carried out with the Department 7 of the BAM in charge. Logistic support is given by the PTB and it is also supported by the SPIN Project. Due to the comprehensive logistics, the Round Robin test will not be finished before October 2012. The Round Robin test comprises the determination of the tensile bending and compressive strengths according to EN 196-1, of the water demand, the initial and final set, and the soundness according to EN 196‑3 as well as of the fineness according to EN 196-6. ­Furthermore, the loss on ignition, the insoluble residue as well as the sulfate and chloride content according to EN 196-2 are integral part of the investigations to be carried out.

Nsesheye Msinjili chaired the local discussion. ­Wolfram Schmidt and Dr. Gregor Gluth conducted the technical discussions as regards the physical and chemical tests. In addition to lively discussions about modifications adapted to the African general conditions, there were some interesting discussions both during the official program and during the breaks and evening events at the Indian Ocean resulting in precise plans to continue the Round Robin test and to establish an Inter-­African laboratory network. There will be an opportunity to continue the discussions when all partners will meet again at the BAM in February 2013 on the occasion of the concluding workshop of the Round Robin test.

All in all, a week full of work ended on 7 July 2012 with many promising results, which, undoubtedly, were due to the excellent organizational talent of ­Nsesheye Msinjili, who was born in Dar es Salaam and was responsible for the local planning. She never lost the control and track of the numerous participants, and she defied persistently all adversities so that the complete program of the week could be carried out according to plan. The investigation and testing of building materials expect a promising future in Africa, and the BAM is happy to accompany the colleagues from the African continent quite a way. And it doesn’t matter if the light will go out or the air conditioner will give up the ghost. What is left is the great confidence of all participants in regards to the future of the building materials sector in Africa, the many new cooperation contacts as well as the melancholy remembrance of the excellent cuisine of Zanzibar and the unrivaled sunrises over the Indian Ocean. 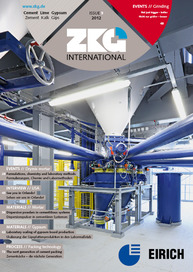 The German BAM Federal Institute for Materials Research and Testing in collaboration with the German Metrology Institute (PTB) are organizing an Africa-wide proficiency testing scheme for the year...

Cross-linking experts in the field of cement and concrete technology

ACCTA 2013 is the first international conference initiated from the SPIN project (Spearhead network for innovative, clean and safe cement and concrete technologies), that is a cooperation between...

ACCTA 2013: Cross-linking experts in the field of cement and concrete technology

ACCTA 2013 is the first international conference initiated from the SPIN project (Spearhead network for innovative, clean and safe cement and concrete technologies), that is a cooperation between...

Working out of Johannesburg, Haver Southern Africa has been active on the African market for the company group already since 2008. Since the company moved into its new offices in the South African...

In September 2009, Wacker Chemie AG and the Vietnam Institute of Building Materials (VIBM), a subsidiary of the Vietnamese Ministry of Construction, celebrated the opening of an independent dry-mix...