This issue is packed with a wide-ranging selection of topics for your reading enjoyment, one particular focus ­being South America, where even the current global economic and financial crisis has proven unable to reverse the pronounced upward trend, with overall growth of 3 to 4 % predicted for 2012. The differences between the various countries of the continent nonetheless remain significant, as is shown by their divergent economic growth rates and per capita cement consumption (see the article starting on Page 48) - potentials and risks keep close company in South America. Brazil, with its population of nearly 200 million, is already one of the world’s largest cement producing nations, however, and major upcoming international events, such as the 2014 FIFA World Cup and the 2016 Olympic Games, will make a further important contribution to the country’s continued positive development.

A further main emphasis this issue is on coverage of the industrial associations. Interviews with Koen ­Coppenholle of Cembureau, Ahmad Al-Rousan of the AUCBM and Dr. Maurizio Casalini of Eurogypsum, tell our readers what concerns these organisations are tackling at present, and the events they are planning. ZKG will, of course, be there, reporting for you, at the AUCBM conference in Dubai from 17 to 19 December 2012.

This month’s issue closes with scientific articles on a variety of subjects, spotlight reviews on the handling and grinding of bulk products, and profiles of several long-established companies in our industry: all-in-all, a diversified and informative range of topics. Your editorial team is confident that you will find numerous items that have a bearing on your own particular interests.

So: stay with us!
This article appeared in 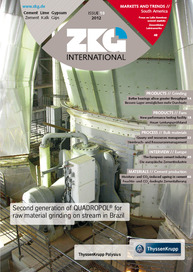 During its General Assembly held in Brussels on 21.05.2014, Eurogypsum elected the President of Saint-Gobain Gypsum Activity Claude-Alain Tardy as President for the period 2014-2016. Tardy succeeds...

CEMBUREAU has launched its new, more user-friendly, ­website (Fig.). The website contains all information about CEMBUREAU as well as the opinion of the association on a number of key topics. In...

The Arab Union for Cement and Building Materials (AUCBM) is pleased to ­announce the opening of AUCBMs ­regional office in Amman/Jordan. The office is headed by Eng. Khaled Tarawneh, General...