The ceremonial groundbreaking on March 11, 2022, which was also attended by Carinthian state politicians, marked the start of construction for Alpacem’s new corporate headquarters. With an investment of € 6 million, the operational heart of the Wietersdorf cement and concrete business unit will be built on the site of the Wietersdorf cement plant by March 2023, with a usable floor space of 1500 m2, 50 modern office workplaces, and changing areas for the site staff. All Alpacem activities with 21 locations in Austria, Slovenia and Italy will be coordinated from Wietersdorf, thus sustainably expanding the company‘s market leadership in the Alpe-Adria region.

“With the new headquarters, we offer our employees an attractive working environment with its finger on the pulse of their needs. It will give us the space to successfully develop Alpacem as a future-oriented and competitive unit,” explain the two Alpacem managing directors, Lutz Weber and Bernhard Auer.

The building concept specifically supports the personal exchange of employees from the management level to the plant employees as well as the international units via meeting zones and social areas. At the same time, the headquarters in Wietersdorf has a strong symbolic value: As Alpacem’s eldest plant, the location not only marks its historical origins, but today, as one of the most modern cement plants in the world, it is an international showcase for sustainable cement production.

During the groundbreaking ceremony, State Councillor for Economic Affairs Sebastian Schuschnig pointed out the positive further development of Alpacem in recent years: “I am pleased that the internationally successful Alpacem is further deepening its roots in Carinthia through the construction of the new headquarters. Especially because it is already being demonstrated here at the Wietersdorf site that targeted investments can not only boost growth but also successively reduce the ecological footprint at the same time.” Against the backdrop of securing the location in the long term, State Councillor Martin Gruber, who himself comes from the region, was also impressed by the project: “With a total of 650 employees, Alpacem now plays an important role as an employer. I am pleased that the new corporate headquarters will ultimately secure a large number of jobs in the region in the long term. This is an essential factor for an active rural area.” Also taking part in the groundbreaking ceremony were Gabriele Dörflinger, member of the state parliament and mayor of Klein St. Paul, and District Chief Claudia Egger-Grillitsch.

Participation in major construction projects in the Alpe-Adria region

Today, Alpacem is making a significant contribution to the construction of modern infrastructure beyond Austria’s borders. For example, the company is supplying the quantities of cements and binders required for the construction of the Karawanks Tunnel, which will be an important traffic artery between Austria and its southern neighbors. In Italy, Alpacem supplied the quantities of concrete required for the redesign of the beach promenade in Lignano, as well as for hospitals in Pordenone, Trieste and Udine. In Slovenia, Alpacem is supplying one of Slovenia’s most important infrastructure projects, the construction of the second Divača-Koper railroad line of the fifth pan-European corridor. Recently, Alpacem has also supplied the expansion of the Koralm Railway, the construction of the S36 near Unzmarkt, and the Trautenfels traffic junction in Austria. Each year, more than 2 million t of cement and binder, or over 350 000 m3 of ready-mix concrete, are used to build projects that will last for several generations. 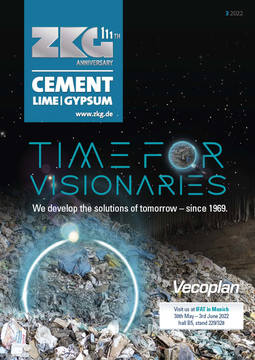 Alpacem, a market leader for cement and concrete in the Alpe-Adria region, secures one of the most important infrastructure projects in the region with the Karawanks Tunnel. Alpacem cements and...

FunderMax and Alpacem are planning the future joint procurement of replacement raw materials and fuels. The aim is to strengthen the circular economy and thus to intensify environmentally conscious...

The Alpacem Groups digitalization offensive has been in full swing over the past five years. During this period, more than  5 million have been invested in innovative plant and environmental...

Cement plant can be virtually walked through for the first time

As part of its digitalization offensive, w&p Zement has taken the next step towards external transparency: People interested in production can now conveniently visit three different w&p locations via...