Some 26.6 million tons of cement were consumed in Germany in 2015. That was 2.2 % less than the year before, but “­Verein Deutscher Zementwerke e.V.” (VDZ – German Cement Works Association) is anticipating a positive market trend for 2016. In VDZ President Gerhard Hirth’s opinion, “The 4th quarter of 2015 was nearly 4 percent better than the year before, and that is a positive sign.”

Most domestic demand for cement last year was covered by German producers. Only 1.2 million tons, or approx. 5 % of overall consumption, was imported in 2015. In comparison with the previous year, that amounted to a 6.5 % decrease. By way of contrast, the export figures added up to approx. 6.6 million tons. According to the German Federal Statistical Office, that was a gain of about 6.5 %.

As Gerhard Hirth sees it, the German cement industry can take an optimistic view of the year to come. “There is enormous political pressure building up,” the VDZ president says, “to create affordable housing and to improve the condition of the country’s traffic infrastructure. We are therefore expecting some positive impacts on cement consumption, especially in the areas of multi-storey residentials and public-sector civil engineering.” 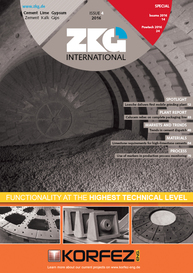 In Germany, approx. 27.1 million t of cement were used in 2014. This represents a 2.2?% increase in consumption as compared with the previous year. The German Cement Works Association (VDZ) is also...

Cement market 2015: Consumption in Germany expected to be lower than last year

For the current year, the German cement industry is expecting a decline in cement consumption in Germany of 1.6 % to around 26.7 million tonnes. On account of the subdued market in April and May,...

Germanys cement industry is expecting a fall in domestic cement consumption by 1.6?%, to around 26.7 million tonnes, in the current year. Due to the restrained trend in the market in April and May,...

Some 400 experts, both male and female, from the cement and concrete industry, and also from related sectors, examined current challenges in their industry in Düsseldorf on 22 and 23 September...

Christian Knell, General Manager of HeidelbergCement in Germany, was elected as the new president of VDZ in Ulm on 27.04.2017. He succeeds long-standing President Gerhard Hirth, who has been at the...