The 2nd Weimar Gypsum Conference held in ­Weimar on 26.-27.03.2014 was a complete success. It was attended by around 120 specialists from 15 countries. The event was planned and organised by the “F. A. Finger Institute for Building Materials ­Science” of the Bauhaus-Universität Weimar in collaboration with the German Gypsum Association (Bundesverband der Gipsindustrie e.V.) and the ­Russian Gypsum Association.

In the following presentations, Holger Ortleb of the Bundesverband der Gipsindustrie in Berlin, Christine Marlet of Eurogypsum in Brussels, and Yuriy Gontcharov and Alexander Buryanov (of Volgograd and Moscow respectively) discussed the general tasks, topics and objectives of the gypsum industry, and also described a central EU project (GtoG LIFE) and the status quo of the Russian gypsum industry, and its perspectives.

The numerous specialist lectures held during the event dealt with the properties of gypsum and its derivates, with new applications and possible uses as a building material and for restoration projects. Only a few of these lectures will be specially mentioned in the following.

Albrecht Wolter (Clausthal-Zellerfeld/Germany) showed the effect of additives in three-phase systems, such as gypsum, water and impurities. He stated that the design and evaluation of model systems is essential in order to gain an understanding of the interaction between PCE-based superplasticisers and stucco. The capabilities of a number of copolymers had been evaluated in order to determine which formulation would increase the productivity of a production line without being influenced by impurities. Subsequently, Hans-Bertram Fischer (Weimar/Germany) discussed the relationship between gypsum and water, before Daniela Freyer (Freiberg/Germany) spoke about the system CaSO4-H2O and presented an overview of the phase characteristics for the application.

Gerd Srocke (Halberstadt/Germany) presented his thesis that high-fired gypsum may be an old building material with a future. On the basis of publications dating back more than one hundred years, compared to findings that are currently put forward as being “new”, but are – in fact – old, he clarified the significance of gypsum as a building material. Traditionally produced high-fired gypsum from a manufacturer of building materials has to contend like “David against Goliath” with “the prevailing ignorance or falsehoods concerning this material”.

Subsequently, Heike Dreuse (Weimar) spoke on the subject of backfilling and repair mortar for plaster and stucco surfaces containing gypsum, as well as for ornamental stucco, before Hans-Werner Zier (Weimar) discussed the effects of swelling mineral formation in samples of mortar and cement pastes containing gypsum, and the consequences for masonry repair measures.

The first day of the conference ended with two lectures concerning gypsum machine-applied plasters. Jörg Neubauer (Bomlitz/Germany) explained the influence on lump formation of the dissolution time of cellulose ethers in an aqueous solution. Andreas Hecker (Weimar) spoke about the characterization of stuccos and assessment of their surface quality.

The second day commenced with a presentation by Yilmaz Sakalli (Siegen/Germany) about the investigation of nucleation in the system of calcium sulphates. Subsequently, Vadim Khozin (Kazan/Russia) spoke about high-strength composition binding agents for structural concretes.

Christian Pritzels’ (Siegen) presentation concerning the strength development of gypsum and the decrease in strength following saturation met with great interest on the part of the attendees, as did that of Ying Wang (Munich/Germany) about her investigation of the water resistance of multi-component binding agent systems on the basis of FGD gypsum.

The subject of additives was addressed by the description of investigations carried out by Victoria Petropavlovskaya (Tver/Russia) into the structural modification of composite materials on the basis of calcium-sulphate-dihydrate and the lecture by Grigorij Jakovlev (Ishevsk/Russia) about improvements to the technical properties of gypsum binding agents by admixing ultra-dispersive and nano-dispersive additives.

The second day of the conference was brought to a conclusion by a lecture by Anna Thomé (Sempach Station/Switzerland) regarding gypsum-based knifing fillers and an improved usability of alternative sources of gypsum.

Reviewing the event, the organizers stated that it had fulfilled or even exceeded all expectations. The conference had been successfully developed into a forum with comprehensive exchange of ideas in the field of calcium sulphate binding agents and their application. The organizers had specially selected the subjects with the aim of meeting the interest of both research and development experts and specialists in the applications sector – and had clearly achieved this aim. Not only did scientists provide an insight into their work, but also building specialists reported on their experience.

A date for the next event in the form of the 3rd Weimar Gypsum Conference has not yet been decided. This year’s attendees and all other interested persons will be informed in good time. 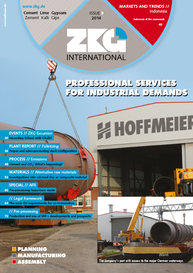 In 2014, the second Weimar Gypsum Conference with 128 participants from 15 countries has shown that a forum for wide exchange of ideas in the field of calcium sulfate binders and their application...

Gypsum (not) only for building purposes

Vom 30.-31.03.2011 the Weimar Gypsum Conference will be held. It is organized by the F. A. Finger - Institut für Baustoffkunde together with the Bundesverband der Gipsindustrie e.V. (Federal...

The 4th Weimar Gypsum Conference will take place in Weimar from 01.04.-02.04.2020. The conference will be organized by the chair of Building Materials of the F.A. Finger Institute for Building...

The 3rd Weimar Gypsum Conference will take place at the Leonardo Hotel in Weimar from 14.03.-15.03.2017. The conference will be organized by the chair of Building Materials of the F.A. Finger...

The 3rd Weimar Gypsum Conference will take place at the Leonardo Hotel in Weimar from 14.03.-15.03.2017. The conference will be organized by the chair of Building Materials of the F.A. Finger...