The members’ meeting of the association, which also serves as a meeting opportunity for the lime industry of Germany, Austria and Switzerland, took place this year at the German Baltic sea resort of Warne-muende. The ­Chairman, Dr. Thomas Stumpf, Management Board Member of Fels-Werke GmbH of Goslar, pointed out in his speech that industrial value cre-ation accounted for 25 % of Germany’s GDP and was the reason why the country had come through the economic crisis so well.

“Industrial value creation chains in Germany – that not infrequently begin with lime – are the basis of our social prosperity, our social security and our education system. Public administrators and politicians are called upon to restore and secure the basic conditions that are necessary in order to guarantee the extraction of local raw materials such as limestone and the cost-effective manufacturing of lime products in Germany”, Dr. Thomas Stumpf appealed to policy-makers in Berlin and Brussels.

The German lime industry calls on politicians to set out a clear industrial policy and quickly put an end to the creeping de-industrialisation that is currently taking place. The BVK chairman sees considerable dangers in the European public debt and financial crisis, as well as in the unsatisfactory implementation of the changeover to renewable energy, with the resultant deterioration in security of energy supplies.

Emission trading has become a constant companion of the lime industry. The third trading period had hardly started when demands arose for a revision of the EU Emissions Trading System (ETS) and discussions commenced about organization of the trading system after 2020. Other challenges facing the lime industry include the conservation of resources, energy efficiency, issues concerning the hazardous substances law and the latest limit values imposed by the Industrial Emissions Directive.

The chairman also presented the latest figures of the lime industry: In 2012, market sales of unburnt products amounted to 17.7 million tonnes, which is a decrease of more than 4 % compared to the preceding year. The main customer was the building industry. Quantities supplied for environmental protection applications – particularly for air purification systems – remained approximately stable compared to the preceding year. Once again, this consumer segment was larger than the building materials industry. Deliveries to the iron and steel industry have increased.

Sales of burnt lime declined to approx. 6.3 million tonnes, which is almost 4 % below the previous year’s figure. This significant decrease is mainly due to a reduction in deliveries to the iron and steel industry. The amount purchased by the chemical industry also declined. However, quantities delivered to the environmental protection sector and the construction sector are showing a positive development.

In the 1st quarter of 2013, sales continued the negative trend compared to 2012. There was again a decrease in sales of burnt products of 1.8 % against the same period of the preceding year. The plus on the environmental protection sector and the construction sector could not compensate for the minus in the iron and steel industry and the building materials industry.

It has to be assumed that results in 2013 will again fall below the figures of the previous year. The lime industry in particular is suffering under the reduction in production capacities of the European steel and auto-mobile industries, which are important for Germany.

Martin Ogilvie, General Executive Manager of the Federal Association, presented the report and accounts for 2012/2013 to the members’ meeting and explained the most important points.

Germany as an industrial location could not do without the lime industry. Limestone and lime are the starting materials for numerous industrial value cre-ation chains. The current core activity areas of the association are lobbying work in Berlin and Brussels on the subjects of the energy revolution, continuation of tax capping for the most energy-intensive users after 2012, the compensation scheme for lime manufacturers under the Renewable Energy Sources Act, and emission trading. The BVK General Executive Manager placed particular importance on the rapid and systematic implementation of measures necessary for the changeover to renewable energy. In this connection, he stressed that the focus should not be exclusively placed on climate-compatibility. “If we don’t want to totally disable Germany as an industrial location, we have to place equal importance on assuring the affordability and security of energy supplies.”

The guest speaker was the physicist Prof. Dr. Gerd Ganteför of the University of Constance, who adopted a differentiated approach to climate and energy policies and thus succeeded in bringing totally new aspects into the discussion. 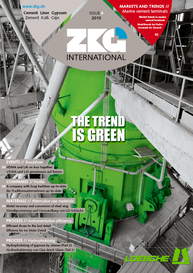 Annual conference of the Federal German Association of the Lime Industry, Hamburg/Germany (17.06.2010)

The member companies of the Federal German Association of the Lime Industry, meeting in Hamburg, have again unanimously confirmed Michael Liell (Fig. 1), member of the Board of Management of Rheinkalk...

The German economy is booming. At the beginning of 2010 we still expected a growth rate of 1.75 % in that year, but now it is clear that the economy performed outstandingly in 2010 and that the...

The General Meeting as a gathering of the German, Austrian and Swiss Lime Industry (Bundesverband Kalk/BVK) was held this year in the Austrian town of Fuschl am See near Salzburg. The meeting was...

On 01.03.2011 the project Wissensnetzwerk Zement-Kalk-Beton (Knowledge Network Cement-Lime-Concrete) was started. It is organized by the German Cement Works Association together with the Federal...