These requirements are top of the agenda for plant optimization. In this issue, you can read about two exciting projects in this context.

The Köhler Kalk lime plant founded in 1938 at the heart of Germany is one of the smallest lime plants in Germany.

The company burns the niche product dolomitic lime. In 2017, a new parallel flow regenerative kiln was put into operation. With this new installation, production capacity was doubled: from 75 to 150 t/day. That may not seem much, but for such a small plant with just 18 employees, the € 9 million investment was a huge achievement. We spoke to Christian Köhler, who has managed the plant together with his father Norbert Köhler since 2013, about why the company opted for the measures realized (from p. 18). Besides energy-optimized production, digitalization was an important requirement for the building of the new kiln. The reports from p. 21 detail the innovative technology used.

LafargeHolcim in Mannersdorf/Austria, with a kiln line production capacity of 2550 t/d, is one of the largest cement plants in Austria.

The cement plant has set a goal for maximizing solid alternative fuel rates with simultaneous reduction of CO and NOX emissions. To reach this target, a conversion from the existing separate-line calciner to an in-line calciner for the kiln line in Mannersdorf has been completed, with consideration of the restrictions of the existing system, aiming for 100 % solid alternative fuel utilization on the calciner and reaching lower emission values. Read about the results from p. 54.

These two plants, a small one and a large one, have reached their goals with their investments and thereby taken an important step towards securing their future. 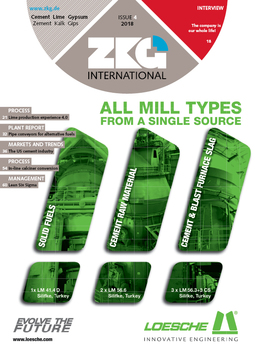 Karadeniz Madencilik San. ve Tic. Ltd. S¸ti., domiciled in Istan­bul, Turkey, placed an order with Maerz for the supply of engineering, license, know-how and equipment as well as technical...

Polysius AG supplied a second lime shaft kiln to Saudi Sand Lime & Bricks in Riyadh/Saudi Arabia. The kiln, with a rated output of 200 t/d of burnt lime was handed over to the customer at the end of...

Polysius AG supplied a second lime shaft kiln to Saudi Sand Lime & Bricks in Riyadh/Saudi Arabia. The kiln, with a rated output of 200 t/d of burnt lime was handed over to the customer at the end of...

The Golden Lime Co. Ltd. from Bangkok/Thailand, is going to install a Maerz Lime Kiln No. 5, a 150 t/d coal/petcoke dust fired unit, at their Lopburi Plant and has signed a corresponding contract with...