Following the success of the first Quarry Life Award in 2012, for which more than three hundred projects were entered, Heidelberg­Cement has now resolved to hold the competition every two years. Students and researchers from Europe, America, Africa, Asia and Oceania are again called upon to submit project proposals for the protection and management of biodiversity in the company‘s quarries.

The second “Quarry Life Award” is again aiming to discover new ideas for the conservation and promotion of species diversity in quarries and gravel pits. HeidelbergCement has long been committed to the preservation and furtherance of biodiversity, both during and after the quarrying process. As Board Chairman Dr. Bernd ­Schei­fele comments: “Protecting the unique local flora and fauna in our more than one thousand quarries and gravel pits around the world as effectively as possible is of great importance to us. We launched our international ‘Quarry Life Award’ because we were – and remain – convinced that we can boost knowledge of the biological value of quarries even further with such new research projects and ideas. This competition provides students and researchers with a fantastic opportunity of getting to know the special characteristics of quarries better and of putting their ideas for the promotion of biodiversity into practice on the spot.”

In addition, the Quarry Life Award gives the participating location a chance of gaining genuine added ecological and environmental education ­value, Scheifele continues. As he notes, for HeidelbergCement the competition is a further means “of promoting the unique biodiversity of our quarries and further evolving existing standards for biodiversity management hand-in-hand with leading universities.”

The application phase for the Quarry Life Award 2014 started on 17.09.2013. Students, researchers and school pupils of both sexes, and also co-operation projects with Non-Governmental Organisations (NGOs) are eligible to enter. Project proposals can be submitted in a t­otal of twenty-two countries until 01.03.2014; in each country, a jury will then select five projects, which must subsequently be implemented at the relevant locations by September 2014. Each national jury will then choose three prize-winners. Irrespective of this, however, all five projects implemented will also have the opportunity of entering the international Quarry Life Award competition.

At international level, the best projects from a total of five categories will each win 10 000 € in the Quarry Life Award 2014. The winning overall project will receive a prize of 30 000 €. The individual categories are “Boosting public awareness”, “Promoting biodiversity”, “Innovation and biodiversity”, “Biodiversity and education” and “Projects by school pupils and students.” 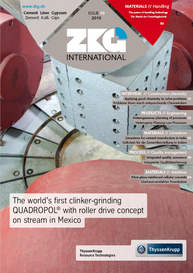 On 29.11.2016, the German Quarry Life Award 2016 was presented in Halle 02 in Heidelberg/Germany. This was attended by approximately 200 guests who had come to see the three best national...