The 2013 edition of the annual European Parliament Gypsum Forum, which took place in Brussels on 16.10.2013, was a great opportunity to present the aims and some of the initial findings of the LIFE Environment project “Gypsum to Gypsum” (GtoG), which is being led by Eurogypsum, the European federation of national associations of producers of gypsum products. The forum aims to foster the dialogue between a wide range of stakeholders in order to promote sustainable construction in Europe. Products of the gypsum industry are responsible for 1 % of all construction and demolition waste (CDW), and the GtoG project (“From Production to Recycling, a Circular Economy for the European Gypsum Industry in conjunction with the Demolition and Recycling Industry”) is targeting to transform the gypsum demolition waste market. The goal is to achieve higher recycling rates of gypsum waste as a significant move towards a resource-efficient economy.

The audience of about 100 participants consisted inter alia of decision makers in the European gypsum industry, representatives of the European Construction Industry Federation (FIEC), Members of the European Parliament and European Commission officials as well as other interested groups. The Gypsum Forum takes place every year as a multi-stakeholder dialogue on strengthening of sustainable construction in Europe and sees itself as a permanent think tank dedicated to development of visions for sustainable construction and real estate sector.

The theme of this year’s Gypsum Forum was “Mega­trends in Construction: the three R‘s-Renovation-Resource Efficiency-Recycling”. MEP Jean-Paul Gauzès, the President of the European Parliament Gypsum Forum gave a welcome speech in which he emphasised the need to strengthen the shift towards sustainable construction. Though gypsum products are indefinitely and fully recyclable, only a small percentage is recycled in Europe. Buildings are currently demolished and not dismantled unmixed, hampering the recovery of gypsum waste. However, the EU has set an ambitious target of 70 % for the recycling of non-hazardous CDW and green public procurement.

Gauzès’s address was followed by presentations by Carlo Pettinelli, Directorate General of the European Commission for Enterprises and Industry, Director for Sustainable Growth and EU 2020, on “Construction for Growth”; Paul Rübig (MEP) on “Raw Materials in Construction”, and Heide Rühle (MEP) on “Enhancing Green Public Procurement”.

“Renovation and Resource efficiency”, the first two R`s on the subject, started with Prof. Dr.-Ing. Gerd Simsch, Managing Director Bilfinger Bauperformance GmbH, who presented the vision of a contractor. He focused in particular on megatrends in the construction and real estate industry and the needs of industry in the context of sustainable construction.

José Blanco, Secretary General of the European Demolition Association (EDA), spoke about recycling, the 3rd R, and the vision of the EDA, while William Neale, Member of the cabinet of EU Environmental Commissioner Janez Poto ˇc nik, gave a presentation on sustainable buildings.

Jean-Yves Burgy, Managing Director Recovering SARL, a partner in the LIFE project, told delegates that a market survey on deconstruction techniques and on the gypsum recycling status covering eight EU countries (Belgium, France, Germany, Greece, Poland, Spain, the Netherlands and the UK) has already been carried out by the GtoG team. The results show that across Europe recycling is more favourable than landfilling. In his presentation he said that “dismantling practices exist but are not widespread in Europe, and that EU regulations are not implemented in a harmonised manner that takes into account local specificities and interests”.

Gypsum is widely used in construction in the EU. More than 1600 million m2/a of European interior surfaces are covered with plasterboard; more than 5 million t/a of plaster are used in Europe for interior lining; and more than 20 million m2/a of European interior walls are separated using plasterboard. Some 100 000 people in the EU are (directly or indirectly) dependent for employment on the gypsum and anhydrite industry.

After the official end of the forum, the event continued in various smaller discussion groups, which were focused primarily on the practical regional implementation of the subjects previously covered in the plenum. Thus, board members of the Federation of the German Gypsum Industry (BV Gips) met with a number of guests from politics and economy to an extended round-table discussion. Here, too, the feasibility of the EU requirements played the main role. In addition, however, general topics concerning the German construction industry were also dicussed; then as well as Günther Hoffmann, Director of the Division of Construction Industry at the Federal Ministry of Transport, Building and Urban Development (BMVBS), senior representatives of all major German and Austrian companies from the gypsum industry took part in the evening event. 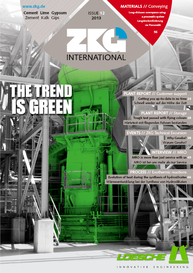 A circular economy for the construction sector

This year again, Eurogypsum, the European Manufacturers Association for Plaster and Plasterboard Products, is a partner of the European Minerals Day, which will take place on 20.09.-22.09.2019. We...

Forum for Sustainable Construction and Renovation

Members of the European Parliament, together with the Gypsum industry, launched on 18.06.2012 in Brussels the EP Gypsum Forum, with the objective of strengthening the movement towards sustainable...

Bernard Lekien has been the president of the European Gypsum Association since 2010. On the 29th ­Eurogypsum Congress in Kraków/Poland on May 10th/11th 2012, his tenure ended and Maurizio Casalini...

During its General Assembly held in Brussel on 09.05., the European ­Manufacturers Association for Plaster and Plasterboard Products (Eurogypsum) elected Bernard Lekien as President for the 2016-2018...