In November 2008 the Construction Equipment and Building Material Machinery Association of VDMA, the German Engineering Federation, in a survey from the VDMA China Liaison Office covered the financial situation on ongoing projects and future developments in China. In the following, selected contents of this report are presented.

1   Financial situation 2008
Statistics published by the National Bureau of Statistics of ­China on November 14th, 2008 show that China’s investment in fixed assets in the urban area was 1131.89 billion Euro in the first ten months. This is equivalent to a year-on-year rise of 27.2  % and up 0.3  % over the same period last year. As a main impetus for economic growth, the nominal investment range of increase this year is the same as last year, even showing a slight rise. In consideration of the increasing range of investment goods in the same period, the actual investment growth rate in this year is less than last year. Since the Producer Price Index in October fell substantially, however, the impact of future prices of investment goods on the actual investment growth rate will be alleviated.

From the point of view of the construction industry and newly-commenced projects, projects under construction show a rise of 24 257 units and the planned gross investment in these projects is up 19.2  % year on year. Newly-commenced projects increased by 16997 units year on year and the gross investment in these projects is up 3.2  %. Viewed from situations of available capital, the available capital for urban investments shows a year-on-year rise of 22.3  %. The domestic loan rose by 14.5  %, the use of foreign capital rose by 5.8  % and the self-raised fund rose by 33.2  %.

2.2 Investment in the transportation sector
The national investment in highway construction (including expressway) is estimated to reach 237.6 billion € in accordance with original Planning of Highway and Waterway Transportation during the National 11th Five Year Plan and medium and long-term plan of the transportation industry. The average annual investment is about 15.8 billion € up to 2010, reaching about 11.3 billion € from 2010 to 2020. A 565.8 billion € plan is formed by adding more than 237.6 billion € based on ensuring that the original investment could be made on schedule or ahead of schedule. This means that not only the original plan could be implemented ahead of schedule, but also domestic demand could be stimulated quickly by means of additional investment.

In principle, these infrastructure investments could take effect immediately. At a National Transport Meeting, Li Shenglin, Minister of Transport, indicated that the Ministry of Transport will make efforts to fulfil the mission of “11.3 billion € in five years” during the period of “The 11th Five Year Plan”. Basically this should ensure that there are highways in all villages and towns, as well as designated villages, all over the country and that there are asphalt (cement) roads in 95  % of the villages and towns and 80  % of the designated villages, basically forming the skeleton of a national expressway network, completely finalizing the construction of five vertical and seven horizontal national trunk roads and inter-provincial highways in the western region.

2.4 Construction of six subway lines in Beijing
The Beijing Track Transportation Construction Corp. has disclosed that the program schedule and layout design of each of the subway lines in Beijing will again be carried out according to opinions on accelerating track transportation construction of the Beijing Municipal People’s Government. According to the new scheme, the total Beijing subway transport mileage will
be extended to 300 km in 2010, to 400 km in 2012, and to
561 km in 2015.

3    Selected company News
Terex Changzhou production base is being constructed
On September 20, 2008, the commencement of the construction ceremony of the US Terex Corporation Changzhou production base was held in Changzhou. The Changzhou plant is located to the northwest of Shanghai. The Changzhou National High-Tech District was chosen as its site due to its capacity for further expansion. In the future, the site will become a Terex Group Manufacturing Park manufacturing a series of products of the Genie brand.

Sany Group has established a manufacturing base in Zhejiang
After the Sany Group Co., Ltd. had signed an agreement with the  Wuxing District Government in Huzhou the construction machinery manufacturing base of the Sany Group has been formally established in the new zone to the east of Wuxing. The first-stage project of the Wuxing construction machinery manufacturing base of Sany Heavy Industry Co., Ltd. covers an area of 1.33 million m2. The main products are an SCC series crawler crane, and a mining auto-unloading vehicle and the gross investment will reach 860 million €. 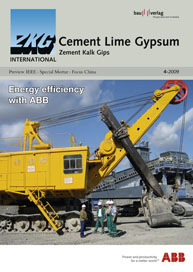