ABB and transformational technology and engineering company Coolbrook have signed an agreement to accelerate the development, industrialization and adoption of RotoDynamic technology to decarbonize hard-to-abate sectors such as petrochemicals and chemicals, cement and steel. RotoDynamic technology replaces the burning of fossil fuel with renewable electricity as the energy source. The new agreement expands ABB and Coolbrook’s existing partnership, launched in January 2022, and was signed at Imperial College in London on 18 October 2022.

It is widely recognized that the decarbonization of heavy industries is essential to achieving net-zero emissions by 2050. According to the International Energy Agency (IEA), chemicals, cement and steel production collectively account for 70%1 of industrial CO2 emissions, equal to approximately 6 billion t annually.

ABB and Coolbrook will leverage their respective capabilities and resources to rapidly commercialize Coolbrook’s patented RotoDynamic technology, which can electrify hard-to-abate industrial sectors. ABB will provide their automation, electrification and digitalization expertise, as well as integrate their electric motors and variable speed drives, to further enhance Coolbrook’s technology by optimizing energy efficiency and operational processes. ABB’s investment will also enable quicker technology readiness and increase corporate capacity to achieve the joint goal of industrial scale up.

“We believe that our RotoDynamic technology, which can help cut up to 2.4 billion t of carbon emissions annually2, is one of the major inventions of our time. Together with ABB we can speed up the development of this groundbreaking technology to help reduce carbon dioxide emissions from energy-intensive processes and bring about the beginning of a clean new industrial era,” said Ilpo Kuokkanen, Executive Chair, Coolbrook. “ABB’s global footprint and technology leadership will be key to accelerating market adoption.”

“The electrification of heavy industry with Coolbrook technology will have a significant impact on our global decarbonization goals,” said Colin Ward, Senior Vice President Chemicals and Refining, ABB Energy Industries. “This new agreement with Coolbrook supports our sustainability strategy and commitment to helping our customers reduce their annual CO2 emissions by 100 megatons by 2030.”

Earlier this year the two companies collaborated in the petrochemicals market to accelerate the adoption of Coolbrook’s RotoDynamic Reactors (RDR) technology to reduce greenhouse gas emissions in steam cracking plants. Together they created a combined offering to reduce energy consumption by 30% and improve yield by 20% in ethylene production. Across cement and steel, Coolbrook’s RotoDynamic Heaters (RDH) technology has the potential to replace the burning of fossil fuels with high temperature electric heating to reduce carbon dioxide emissions and increase process efficiency.

Both RDR and RDH have received significant attention from leading players in chemicals, cement and steel industries, and Coolbrook has already started cooperation with major industry actors including Shell, Cemex, Ultratech and ArcelorMittal. According to a study conducted by KPMG, RotoDynamic technology has an estimated gross market potential of approximately € 400 billion and is expected to become the industry standard in industrial electrification. 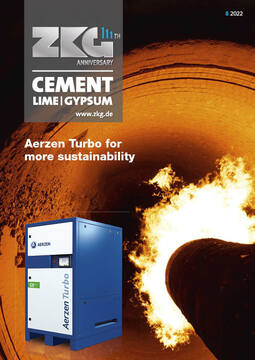 Cement production represents 7-8% of the global CO2 emission  carbon capture technologies are essential to reduce that number and meet the targets of the Paris Agreement. The new collaboration...

The cement and construction industries are among the highest CO2 emissions generators in the world. The cement industry alone accounts for 8% of global emissions, not far behind the agriculture...

Urgent action in three key areas could save around 900 million t of CO2 annually by 2030. On November 10th, 2021, Ian Riley, World Cement Association CEO spoke at the Sustainable Innovation Forum...