The editorial team of ZKG INTERNATIONAL met Dr ­Detlev Rose, Chairman of the Board of Polysius AG, on the ­occasion of the company’s 150th anniversary. The very infor­mative conversation covered not only the company’s history but also the highs and lows of Polysius AG and its future direction.

ZKG: What company strategy enables a company to operate successfully over many years?

Dr Rose: There has to be a market, which is naturally the basic starting requirement. Secondly, the products and processes that are being sold must really be good. It is also necessary to stay innovative, not be satisfied with the current situation, and to try to develop ever better machines and designs. A third point that is very important for us is the ethos of the company, which is one of the essential assets at Polysius. The expertise of the staff is important – it isn’t shown in the capital assets but is an intrinsic part of the people themselves.

ZKG: How does the company achieve such identification of the employees with the firm?

Dr Rose: We are a very communicative company. Information is passed on to all members of the firm – we have a very open approach, not just in Beckum but worldwide. Our approach to work gives the employees a very high level of responsibility, i.e. we place a great deal of trust in them.

ZKG: From family firm to joint-stock company within a large industrial corporate group – what still remains of the family company in the present structure?

Dr Rose: The employees identify strongly with Polysius, and here in Beckum we tend to operate as a medium-sized company. There are short communication and decision-making channels which still characterize our daily work.

ZKG: How has the firm grown into an international joint-stock company?

Dr Rose: The history of Polysius has been associated with some difficult periods. The company had grown continuously up to the 1st world war. The company that emerged from a small fitter’s shop developed the cement business and supplied complete plants to non-European countries by the start of the 20th century – at a time when there were no faxes, mobile phones or easy air travel.

During the 1st world war there was a sharp decline, but afterwards the company continued to grow until the final phase of the 2nd world war. Because of some unique features, such as the Lepol kiln, Polysius was quite successful. The greatest break occurred at the end of the 2nd world war; the question was where Polysius saw its future – in the west or the east zone of Germany. Dr Curt Prüssing founded Westpol GmbH in Neubeckum 1946 with a few employees – previously there had been over 1000 employees working for Polysius in Dessau. I find this part of the company’s history particularly impressive – there was nothing apart from a few drawings and somehow the company had to get back on its feet again.

ZKG: Did this mean that the company had moved completely to Beckum?

Dr Rose: No, there was a split development – there were still manufacturing workshops in Dessau and production continued there under VEB Zementanlagenbau Dessau.

ZKG: What were the highs and lows for Polysius?

Dr Rose: The time immediately after the 2nd world war was the most difficult period that the company had to overcome. After that it was continuously onward and upwards, naturally with some discontinuities – we all know that the world economy has had some ups and downs in the past 60 years.

ZKG: And the highlights?

Dr Rose: The development of the Lepol kiln gave Polysius a unique selling point – it is obviously wonderful to have a technology that no-one else has. There is also the Polycom® high-pressure roller mill that Polysius developed in licence until industrial application. This mill can grind cement clinker and ores under high pressure with a good energy balance.

However, there were also some outstanding points in the further development of the company – one really important step was the takeover of the majority of the shares by Fried. Krupp AG. This was so important because at the start of the 70s the business could no longer be handled as a family firm. With some projects, the order volume reached a 2–3 digit million DM region. In Fried. Krupp AG an economically and financially strong partner had been found.

ZKG: .... and the takeover of Maerz Ofenbau?

Dr Rose: In the last 5 –10 years there has been a very strong development at Polysius that was not perceived as such from outside. Two acquisitions were made: the company Maerz Ofenbau, which predominantly produces lime shaft kilns is a company that fits in very well with us. ?We have strengthened the service sector in the USA through the acquisition of AC Equipment, a company which operates in the service sector for various branches of industry. Furthermore we have formed 20 new subsidiaries.

ZKG: What has been the role of the incorporation of Polysius in the ThyssenKrupp Group?

Dr Rose: This incorporation has been most important for us. We would not be in a position to carry out business on the current scale unless we were part of the Group. We would lack the financial background. No-one would entrust us with sums of tens or hundreds of millions without appropriate securities. And there are some synergies, particularly due to the worldwide presence of ThyssenKrupp.

ZKG: What is going to be the future orientation of Polysius?

Dr Rose: The developments of recent years will be continued, and the network of subsidiaries will be continued to ­improve customer relations still further. We continue to aspire to and to develop ­technological leadership. During recent years we have further extended our turn-key capabilities. 20 ­­turn-key plants have been built around the world in the past 10 years, and currently we are ­handling 6 turn-key plant projects. There is a growing demand for turn-key plants. It is our aim to offer this concept worldwide; this will also be a very important factor for future success.

ZKG: Where are the current turn-key markets for Polysius?

Dr Rose: Traditionally, these are in the Middle East, the Gulf region, Saudi Arabia, the United Arab Emirates. We ­currently regard Central America to be a strong market – at present 2 turn-key plants are being built there by Polysius. This has not been easy, but our local representation proved an advantage here. Polysius has just built a new cement works in Namibia .... wherever there is a demand we try to build turn-key plants but we haven’t yet managed this in all parts of the world.

ZKG: Is Polysius also on the move in other industries?

Dr Rose: In the last few years we have extended the minerals business further. This is partly to have second string to our bow in addition to the cement business so that we can even out fluctuations in the level of capital investment by our customers. We have thought about the modifications that have to be made to our cement equipment so that this can also be used for processing mineral materials. For example, we now sell more high-pressure roller mills in the minerals sector than in the cement sector. At present the minerals and service sectors account for 30 –35  % of Polysius’ business volume. The main markets are South ­America, South Africa and Australia. We are hoping for others, such as the CIS countries or China.

ZKG: It seems that research and development really play a large part at Polysius?

Dr Rose: This sector is essential for Polysius – which is clear from the fact that one of the first buildings that was built after the move to Beckum was the research laboratory. In this research centre we have developed new machines and processes and have tested materials that have come from all over the world. This development work is indispensable for our business.

ZKG: A question that has to be asked in the current economic situation: how is Polysius dealing with the crisis?

Dr Rose: Naturally, we are also aware of the crisis, like almost every other company. We have not had any serious problems in respect of cancelled orders. Of course we have seen a significant drop in incoming orders in recent months, but the existing orders from 2008 will keep us going for some time. However, the company and the employees have always understood that is not possible to make progress all the time. I have been with the firm for 20 years and I am experiencing the 3rd crisis. I know that in a responsible position one must take precautions because no crisis has ever announced that it is coming! One must always be aware that a crisis can occur suddenly. We are lean and have diversified our business, so that we are well prepared for hard times.

Anyway, our cement business has not altogether disappeared. It is expected that 30 – 50 million t/a new capacity will be contracted out in 2009. Up to a few years ago the yearly ­
average for newly-installed capacity was about 30 million t/a. Today we are at 40 million t/a; so that there is no disaster at present.

ZKG: What new product developments are there at Polysius?

Dr Rose: During recent years, the POLYTRACK® cooler was a great success. In addition, in the past year we have introduced a new development in the field of laboratory automation onto the market. ­According to the demand we are dealing with larger plants. The 10 000 t/a plant of Yamama Saudi ­Cement Co. is a good example.

One important key criterion for the future will be the efficiency of the plants (especially the energy efficiency). It all depends on reducing the environmental effects and the energy requirements and to reduce CO2 emissions.

ZKG: Finally, may I ask a very important question – how is ­Polysius going to celebrate the company’s anniversary?

Dr Rose: We are going to celebrate the anniversary at Beckum – we are very strongly associated with the location and the region. There will be a three-day event, which will be a celebration together with clients, employees, owners and business partners.

ZKG: Dr Rose, thank you very much for the open discussion.
This article appeared in 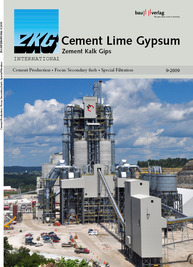 From family firm to joint-stock company

150 years of engineering by Polyisus  a portrait

The Beumer Group from Beckum is the recipient of this years Axia award. In Duesseldorf on February 6, 2012, the auditing firm Deloitte commended the intralogistics specialists for their sustainable...

Alternative raw materials and fuels are gaining in importance

Polysius AG of Neubeckum, a member company of the ThyssenKrupp Group, and Vecoplan AG of Bad Marienberg, a subsidiary of M.A.X. Automation AG, are going to address themselves even more strongly to...

Alternative raw materials and fuels are gaining in importance

Polysius AG of Neubeckum, a member company of the ThyssenKrupp Group, and Vecoplan AG of Bad Marienberg, a subsidiary of M.A.X. Automation AG, are going to address themselves even more strongly to...

Without employees who are top fit as regards their job training, your competitive advantage is quickly lost: only optimally trained plant personnel are motivated and capable enough to keep production...