Not only has the biggest democracy in the world proved itself to be stable during the last Parliamentary elections, this emerging market has faced the global economic crisis relatively calmly. This is because, unlike China, India is not dependent on exports. The slowly but steadily growing affluence will take the building industry in all sectors onto a sustained course of growth.This is indicated by a current market study on the Indian construction, construction materials and mining equipment industries, which the VDMA (Verband Deutscher Maschinen- und Anlagenbau e.V.), Germany’s engineering federation, had commissioned for the bauma partner region.

Industrial and commercial construction alone should expand annually by 10  % up to 2012. This development is being driven mainly by the growing number of small and medium-sized companies from the key industrial sectors of the automotive supply industry and medical technology. The IT sector is also continuing to grow and is generating a demand for commercial property. Of course the construction of commercial enterprises is also benefiting from the increase in mass purchasing power: according to the VDMA study, growth rates of as much as 13  % annually are expected in this segment. Construction of private housing is developing equally dynamically. Here the annual growth of 6 to 7  % is concentrated predominantly in the expanding Indian megacities, where around a third of the new living space will be in tower blocks. The construction of the infrastructure should be particularly exciting, because the government sworn into office under Prime Minister Singh has given top priority to developing the roads, railways, airports, and power and water supply systems. A total of 500 billion US $ is to be invested by 2012 in measures to improve the infrastructure. In addition India will push ahead with the privatisation of energy and commercial enterprises and so curtail the still high susceptibility of the public authorities to corruption.

Because India is the partner region for bauma 2010, this gives German companies an outstanding opportunity to gain information and forge contacts with Indian representatives from commerce and industry. We know from experience that the concept of partner regions greatly increases the number of top-flight foreign trade visitors from the partner region. The business climate between Germany and India is developing extremely positively anyway, according to a survey by the German-Indian Chamber of Commerce: four out of five companies surveyed see good or even excellent market potential for their goods in the country with its 1.1 billion inhabitants, and are planning to expand their investments. 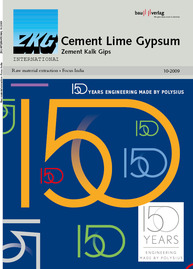 Lafarge SA has signed an agreement to raise 200 million  through capital increase subscribed by Baring Private Equity, Asia, and representing a 14?% minority stake in its ­Indian subsidiary,...

The first BulkSolids India held in March 2010 was a great success. Participation of around 800 delegates confirmed the great importance of such a platform in India which is unique to the Indian...

The Indian cement industry, currently in its 103rd year of existence, has a 7?% share in global cement production. Technologically, Indian cement plants are comparable with the best in the world. In...

Canada to be bauma 2019 partner country

Canada is one of the worlds most important markets for the international construction machinery, building material plant and mining machine industry. It is the worlds seventh biggest construction...