Lafarge announces that it will receive Brazilian cement assets in exchange for the sale to Votorantim on February 3rd, 2010 of its 17.28  % stake in the Portuguese Cimpor group. The terms of payment depended on the outcome of the public takeover bid for Cimpor. With these assets, Lafarge becomes one of Brazil’s top three cement operators with 7 million tonnes in a buoyant market averaging 5  % annual growth. Already active in Brazil with four plants and one grinding station, Lafarge will now be able to establish new positions in fast-growing regional markets in the Northeast and Midwest, while reinforcing its presence around Rio de Janeiro, which has bright prospects in preparation for the World Football Cup in 2014 and the Olympic Games in 2016. This acquisition, leveraged by Lafarge‘s synergies with existing positions and market growth, will have a positive impact on net earnings per share and ROCE as of 2010, and should increase Lafarge‘s EBITDA in Brazil by 85 million € as of 2011 and by more than 100 million € in 2012. Through this transaction, Lafarge was able to unwind its minority stake in Cimpor while strengthening its position in Brazil, where Lafarge now has 1200 employees and is active in its four business lines: cement, aggregates, concrete and gypsum. The Brazilian competition authorities have been notified of the latest phase of the transaction between Lafarge and Votorantim.

www.lafarge.com
This article appeared in 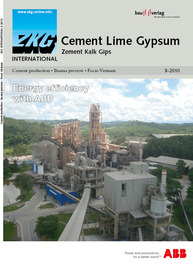 Lafarge strengthens its presence in Brazil

Lafarge announces that it will receive Brazilian cement assets in exchange for the sale to Votorantim on February 3rd, 2010 of its 17.28??% stake in the Portuguese Cimpor group. The terms of payment...

FLSmidth has been awarded a contract worth approximately 44 million US$ from Brazilian Votorantim Cimentos for the supply of five processing lines for five cement plants in Brazil as part of...

Lafarge announces the sale of its cement operations in Honduras to Cementos Argos for a value of  232 million (total enterprise value  435 million). This enterprise value represents a 2012...

Lafarge SA has signed an agreement to raise 200 million  through capital increase subscribed by Baring Private Equity, Asia, and representing a 14?% minority stake in its ­Indian subsidiary,...