In the German construction equipment and building material machinery industry sales fell in 2009 nominally by 43  % to 9.5 billion €. “2009 has been the most difficult year ever for our industry,” said Dr. Christof Kemmann, chairman of the industry‘s association, at a board meeting of the association in Frankfurt which was held in March 2010 (Fig.). 2010 will be better. After the slump throughout the previous year, the manufacturers of construction machinery are expecting a slight increase in turnover by five per cent. Manufacturers in the building material machinery industry are assuming another decrease by ten per cent in turnover compared to 2009, with different effects on the different areas of the industry. In 2010, the industry is putting its hopes on its traditional markets in Europe and, in particular, on regions of growth in the Far East, especially China and India. But South America and North Africa have also proved to be stimulating.

www.vdma.org/construction
This article appeared in 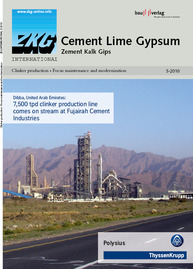 In spring 2009 the Messe München GmbH (MMG) and the Association of Equipment Manufacturers (AEM) announced that they have entered into an agreement covering a closer cooperation for the organization...