The Indian economy has been on the upswing for the last few years, barring small patches here and there. The Indian cement industry has been following suit, mostly surpassing the national economic growth rate. Over the last decade, however, the cement industry saw many ups and downs in capacity realization. Table 1 gives the trend of capacity installation during the last decade. As per earlier estimates, though it was targeted to reach 300 mtpa in 2011–12, this may be slightly surpassed in 2010 –11 itself. The next target for industry is 600 mtpa capacity to be reached by 2020. The installed capacity at the end of 2009 –10 (~  260 mtpa) itself has exceeded the forecast (of 255.84 mtpa) of the Planning Commission’s Working Group on the Cement Industry for XI Plan (2007– 08 to 2011–12) for the year 2010, for the low growth demand scenario of
GDP increasing at 8  % and cement at 10 %. It is also likely that the industry will improve the targets for the years 2011 (of 280.15 mtpa) and 2012 (of 292.4 mtpa) for the moderate growth demand scenario of GDP increasing at 8.5  % and cement at 11%.

The Indian cement industry produces a variety of cements, utilizing different industrial wastes and special purpose cements. The most commonly used wastes are fly ash from thermal power plants and granulated blast furnace slag from steel plants for the production of blended cements. Different cements made in India are OPC, PPC, PSC, sulphate resisting cement, railway sleeper cement, oil well cement, low heat and some other special cements. The production trend of these cements over the last decade is reflected in Table 2 and Figure 1. It shows that while the overall production increased on an average at about 9  % pa, production of OPC decreased even in absolute terms and percentage-wise it went down from 56  % to 25  % (up to 2008 – 09). At the same time, PPC production went northwards from 32  % to more than 66  %. Production of PSC, on the other hand, remained more or less flat. Insofar as PPC, the industry had till lately been getting fly ash free at the thermal power station dumping yard. The advantage is now lost, since it is now a priced commodity mostly. Though, it may lead to some immediate adverse impact, it appears unlikely that it will be sustained in long term.

Although lately the industry has been feeling the pressure of surplus supplies and prices have also taken a beating in certain areas, the industry is not losing any steam. In fact, it is continuing all efforts to ramp up the capacity, without any withdrawal symptoms, hoping to ride with the higher economic growth rate of the country. There is so much activity going on in the sector that it has become difficult to keep proper track of the status of the ongoing projects and announcements by companies regarding their plans for expansions, modernization, installing greenfield units, grinding units (split location), captive power plants or waste heat recovery systems. The information on projects in the offing and some at different stages of implementation is summarized in Table 3. This information has been collated from a variety of sources such as discussions with company executives, ce­ment industry news websites (cement.industry-focus.net, etc.), company websites, newspapers, etc. Efforts have been made to reconcile the data to the extent possible. Table 3 shows that most capacities are likely to be realized before the end of 2012.

As recently announced, the overall growth plans of some cement companies are as follows:

– Grasim and UltraTech Cement have massive plans to invest Rs 100,000 million, including Rs 56,000 million for brown field expansions aggregating 9.2 mtpa at Chhattisgarh and Karnataka with grinding units and bulk terminals. Capex of grinding unit in Gujarat and waste heat recovery and packaging terminals across locations worth Rs 26,000 million are planned over three years

– Italcementi intend to set up 9 mtpa capacity in Rajasthan, Gujarat and Karnataka

– Jaiprakash Associates are going ahead in capacity creation very aggressively. The projects under implementation will add an incredible 12 mtpa to the present capacity of 22 mtpa by mid 2011 and they propose to lift it to 37 mtpa by March 2012.

The Indian cement industry occupies the prominent position of second largest producer in the world, with a production of about 210 million tonnes of cement in 2009 –10. Of course, the per capita consumption of 156 kg, happens to be very low compared to the world average of 396 kg, mainly owing to the very large population. Despite some minor glitches now and then, the industry is always very upbeat about the overall prospects supported by the huge construction activities going on in the country. Some of the large infrastructure and construction projects in planning and under execution are as follows:

– ­Investment of Rs 400 billion for expansion of airports

On the technology front, the Indian cement industry is second to none. Today, it can boast of the latest operating technology anywhere, clean and green. In its endeavour to expand, it never lost sight of the advantages of energy efficiency, eco-friendliness and state-of-the-art technology. The plants incorporate 5/6 stage low pressure cyclones, multi-channel burners, high-efficiency VRMs and roller presses, modern mechanical material conveying systems, fully computerized process control systems and so on. While there are plants in the capacity range of 2.5 to 3.5 mtpa capacity and 12 000 tpd single stream, the average energy consumption levels achieved, as reported by NCB, are 80 kWh/t of cement and 725 kcal/kg clinker. Furthermore, environmental concerns have also been addressed by the industry with equal zeal, always on the lookout for installing the necessary latest pollution control equipment and utilizing alternative raw materials and fuels (sub-grade limestone, waste materials and fuels, hazardous wastes, etc). Many Indian companies have been taking a proactive interest in the Cement Sustainability Initiative (CSI) and the Asia-Pacific Partnership for Clean Development and Climate, popularly known as APP and many projects have already either registered under the Clean Development Mechanism (CDM) or have CERs. About 70 plants have ISO 9000 and 40 plants ISO 14000 Certifications.

Talking about R&D, the apex organization of the country, the National Council for Cement and Building Materials (NCB) has been playing its role eminently and responsibly. NCB is the largest industrial and technology support organization of its kind, for research, technology development and transfer, education and industrial services for cement, building materials and construction industries. Its flagship NCB International Seminar series has been offering an opportunity to all concerned to get together and interact with one of the largest and fastest growing scientific and technological economies in the world. The next 12th NCB International Seminar on Cement and Building Materials is scheduled to take place from 15th – 18th November 2011 at The Ashok, New Delhi. Make your plans to attend, now. Do not schedule anything else for that period to avoid later regrets.

With best wishes from ­India! 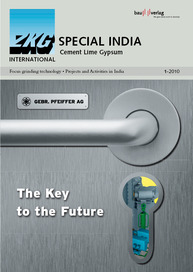 1 Overview The cement industry in India continues to be the second largest producer in the world, which is about 7?% of the annual global cement production today. While the global economic scenario...

The 13th NCB International Seminar on Cement & Building Material was conducted at the Manekshaw Centre, New Delhi/India from 19-22 Nov, 2013 under the aegis of the National Council for Cement and...

1 Overview To meet the Govt. plans on development of highways, smart cities, affordable housing and other infrastructure, the projected demand for cement in 20192020 is 415 million t, implying...

1 Introduction Marc Twain noted: India is the cradle of the human race, the birthplace of human speech, the mother of history, the grandmother of legend, and the great-grandmother of tradition. Our...

1 Introduction India is a fascinating country. Every major world religion is represented here. In a world of conflict and bigotry, the country provides an alternative model of peaceful co-existence....