This year HAVER & BOECKER is especially proud of the fact that its workhorse, the ROTO-PACKER®, has been successful on the market for 50 years. The jubilee was celebrated at the Machinery Division in Oelde/Germany on 30.08.2010. Both the first ROTO-PACKER® 6 RV, as well as the youngest generation, the ROTOCLASSIC® 12 RCC, were installed at the PHOENIX Zementwerke in Beckum/Germany (Fig. 1). The demand for higher packing and loading speeds at cement plants at the end of the 1950s was the impetus behind the development of the rotary packing machine that replaced the HAVER inline packers with up to 6 filling spouts established at that time. However, yet another milestone can be celebrated: the production of its 10 000th MEC III electronic weigher, which has also written a success story of its own. 5000 units have been sold in the past two and half years alone.

The MEC® III is not only a weigher, it is responsible for recording the weight and controlling the weight-dependent material flow in the filling spouts and secondly, it also takes over control work such as valve bag closing and the discharge from the packing machine. The MEC® III is the first self-actuating
weigher with a European design approval, which HAVER & BOECKER received in 2007. The graphic operator panel (Fig. 2) enables a dialogue with the machine operator in almost ­every national language. Because of its Ethernet capability, the filling spouts can also be operated externally. This user-friendly concept makes the MEC® III accessible for remote diagnostics and software downloads via the internet. A quality assurance conforming operational data recording is also possible with the MEC® III network, which makes manual checks and records redundant. The MEC® III measurement system enables a maximum weighing range resolution of 6000 parts. That is a top value in the field of self-actuating weighers for filling. The European-wide MID approval (MID = European Measurement Instrument Directive) and many other design approvals outside Europe make HAVER & BOECKER with its MEC® III an ambitious specialist in electronic weighing. 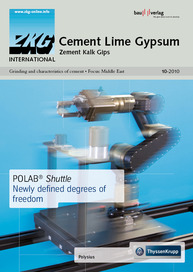 After last years large 125-year jubilee, Haver & Boecker recently had another occasion to celebrate. With the sale of the 30?000th electronic weigher, the company based in Oelde/Germany reached...

Since the market introduction of the HAVER ROTO­CLASSIC® cement packing machine two years ago, more than 100 units have been sold worldwide so far. During the 50-year ROTO-PACKER history, HAVER &...

Contract for complete plant planning, civil works and engineering Cimfaso contacted Oelde/Germany for the first time in the spring of 2013. The company had planned the construction of a cement mill...