The annual Conference on Building Chemistry of the GDCh (German Chemical Society) was held at TU Dortmund University on 7th and 8th October 2010. The symposium provided scientists from universities, research institutes and companies with an opportunity to discuss research on building chemistry and exchange technical information.
Overall 21 scientists presented their results to the 215 par­ticipants; scientific results were also displayed on 28 posters, and 14 companies presented their products and analytical equipment.

The Conference on Building Chemistry focused on green building materials and alternative cements, lime- and gypsum-based building materials and organic admixtures as well as on damage mechanisms and durability. In their opening speeches the Rector of TU Dortmund University, Prof. Gather, and the Chairman of the GDCh, Prof. Dröscher (Fig. 1), drew attention to the need to deal carefully with raw materials and energy in the production of building ma­terials. Dr. Motzet, the Chairman of the GDCh section Building Chemistry as well as the host, Prof. Middendorf (Fig. 2), Head of the Department of Building Materials at TU Dortmund University, spoke about the variety of opportunities in ­building chemistry to develop multi-functional, energy-reducing building materials. The first keynote speaker, Prof. Singh from Sharda University in India, also focused on the topic of energy efficiency. He explained possible ways of reducing the clinker in Portland cements by replacing it with latent-hydraulic and pozzolanic additions. The second keynote speaker, Prof. Gerdes from the Karlsruhe Institute of Technology, also pointed out the absolute necessity of energy-reduced building materials but also highlighted the future opportunities for building chemistry to counter climatic change caused by emissions. There was also a presentation about the opportunities for increased use of coal fly ash in concretes and, even further, a report about binders for the production of concretes that are free of Portland cement. The Dortmund development of multi-functional, air-hardening, high strength foam concretes that, without any autoclave hardening, can be used for thermal insulation as well as for constructive functions also makes a contribution to energy reduction. Furthermore, ultra-lightweight aerogels were introduced as building materials of the future for thermal insulation. Another report dealt with the use of building demolition rubble for producing recycled granules as an alternative form of aggregate.

The topics of sustainability and durability also played major roles in the lectures dealing with special aerated plasters based on hydraulic limes, lime-based masonry and pointing mortars for repairing historic buildings, parameters that can control plasticity in lime-based mortar systems, and active biocidal agents in façade coatings. There were also reports on the chemical stability of cement-based materials in aqueous media and on damage mechanisms in polymer-modified mortars. The session on organic admixtures was dominated by the discussion of fundamental problems concerning the interactions between organic admixtures and inorganic binder phases.

The Hans-Kühl medal was awarded to Dr. Hugo Rietveld (Fig. 3) at the conference for his achievements in the field of quantitative phase analysis. The Rietveld method named after him has become established in recent years, especially in the cement and building materials industries, for quantitative determination of the phase constitution. Rietveld’s work has contributed significantly to the understanding of the complex phase relationships in Portland cements, cal­cium aluminate cements and gypsum building materials; before, during and after hydration. The most recent of the research work presented here also used the ­Rietveld method for determining amorphous constituents. The laudation on the award of the Hans-Kühl medal to Dr. Rietveld was given by Prof. Pöllmann from University Halle-Wittenberg who also pointed out that behind the name of Rietveld stands a personality and not just a method of measurement.

Other highlights of the conference were the lecture by Prof. Plank on the accident at the BP oil well and the award of the GDCh Youth Prize for Building Chemists during the conference dinner at the Dortmund Signal-Iduna Park (BVB Stadium). Furthermore, the Deutsche Bauchemie e.V. also awarded three prizes for the best posters. The conference finished with an excursion to MC-Bauchemie in Bottrop (Fig. 4). The next GDCh Conference on Building Chemistry in 2011 will be held at the Technical University Hamburg-Harburg. 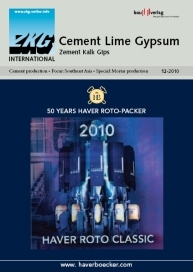 The number of industrial and academic users of the quantitative phase analysis of cement according to Rietveld has been rapidly increased in the last few years. However, interlaboratory tests have...

The number of industrial and academic users of the quantitative phase analysis of cement according to Rietveld has been rapidly increased in the last few years. However, interlaboratory tests have...

Sustainable building materials of the future

About 250 construction chemists from Germany and Switzerland met at Hamburg-Harburg Technical University on 06.07.10.2011 on occasion of the Conference on Building Chemistry of the GDCh (German...