FLSmidth has received a contract worth approximately 30 million € from the Russian Open Joint Stock Company Sebryakov Cement for the supply of equipment for their new cement production line. The plant is located in Mihkailovka city, approximately 180 km north of Volgograd. The order is based on an ongoing collaboration between Sebryakov Cement and FLSmidth which goes back to 2005 when the contract for a new, and until now the biggest cement mill in Russia, was signed. The new production line will substitute the existing wet line, reducing energy consumption significantly and increasing production with 1 million tons of clinker per year. The contract includes supply of the process equipment and technology, starting from intake of the raw material with a combined crusher, material handling, new raw material storages, modern kiln with dry crusher and 3-stage preheater, clinker cooler, clinker transport to existing storage as well as upgrade of the existing electrostatic precipitator to ensure the lowest possible dust emission. Automation- and control equipment will also be supplied for the new production line.

“Russia is a market well-known to FLSmidth and we have a strong local presence in the country. We believe that Russia as the 5th largest cement consumer in the world has a large potential. Most of the existing capacity (~80%) is technologically outdated and based on old process technology. Russian cement producers are actively engaging in bringing more modern capacity on stream, supported by the government,” commented Group CEO Jørgen Huno Rasmussen (Fig.). 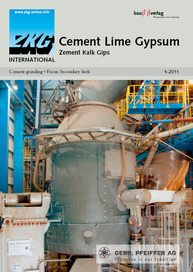 FLSmidth has received a contract worth approximately 150 million  from the Russian company Kaluga Cement Plant LLC for the supply of a complete cement plant located in the Kaluga province some 300...

FLSmidth has been awarded a contract worth approximately 55 million  by the Russian company Novoroscement, to supply equipment and supervision for modernisation of its ­Proletariy cement plant. The...

FLSmidth has signed a contract worth approximately 55 million  (420 million DKK) with the Indonesian cement producer PT Semen Gresik for an 8000 t/d cement production line. The contract is for the...

FLSmidth has signed another contract with Wadi El Nile Cement Company (WNCC) for operation and maintenance of their cement plant located approximately 120 km south of the Egyptian capital, Cairo. The...