Raysut Cement Company (RCC) has acquired UAE’s Pioneer Cement, thus representing it one of the biggest cement manufacturers in the Gulf area. Raysut Cement Company was formed in 1981 with a 210 000 ton capacity four-stage suspension Pre-heater kiln. The output was subsequently enhanced to 250 000 tons with extensive modification and optimization. Today, Raysut Cement’s total cement capacity has reached to 3.0 million t. The acquisition of Pioneer Cement has build in further 1.7 million tons, expandable to 1.8 million tons, to the already existent capacity of RCC, turning it into approximately 4.7 million tons every year. 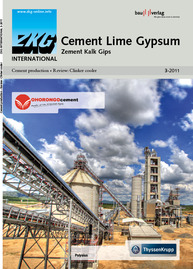 The World Cement Association has announced that it has further expanded its international network of members by welcoming Raysut Cement Company (RCC) as a new Corporate Member. Founded in 1981,...

Raysut Cement Company, one of Omans largest cement manufacturers, has signed a land lease agreement and port of terminal services agreement with the Port of Duqm Company SAOC for building a new...

ABB has successfully installed and commissioned the first SpectraFlow raw material online analyzer in the Gulf region (Fig.). Together with RMP (Raw Mix Preparation) ABB has delivered and installed...

The biggest plant in the UAE

The Union Cement Company (UCC) was one of the first cement producers to be established in the United Arab Emirates (Fig. 1). It was set up in 1972 in the Khor Kwair Industrial Area and production...

Fujairah Cement Industries (FCI) has for the last thirty years been one of the leading cement companies in the United Arab Emirates (UAE). A new line has now increased production capacity from...