About 175 participants were welcomed by Ferdinand ­Leopolder, CEO of drymix.info on occasion of the Third International Drymix Mortar Conference and Industry Showcase idmmc three in Nuremberg/Germany (Fig. 1). As for the previous events, a number of high-ranking specialists held a presentation (Fig. 2) on current developments and future trends in the field of drymix mortar.

At the opening of the conference Technical Chairman Prof. Dr. Johann Plank and Ferdinand Leopolder welcomed the delegates and the Technical Panel (Fig. 3). Prof. Plank gave a brief overview of the topics of the entire conference and provided an outlook concerning the technical performance of well-formulated drymix mortars in the future. He sees a special function for those materials in the ongoing discussion about sustainable construction, especially when it comes to the longevity of the structures built. He also introduced the high-ranking technical panel which evaluated the presentations and stimulated the discussions during the entire conference. It consisted of Prof. Dr. Yasuhiko Sato/Japan, Dr. Hubert Motzet/Germany, Prof. Dr. Andrey Pustovgar/Russia and Mario Kristeller/Brazil.

Ferdinand Leopolder introduced the Green Mortar Study 2011, currently under way at drymix.info. He encouraged chosen delegates to participate in this multi-question survey directly during idmmc three (two workstations were provided in the foyer). The study was compiled in cooperation with and with the support of the Karlsruhe Institute of Technology (KIT). It aims at portraying the position of the drymix mortar industry (including suppliers) towards so-called “green” materials, as well as the influence of current trends on product design decisions and corporate strategies. The full title of the work is: “Green Mortar Study 2011 - A Market Research and Survey on Sustainability Strategies for Mortars and the Perception of Environmentally Compatible Materials in the Global Drymix Mortar Industry”.

Presentation of technical and formulation ­developments

Steffen Schneider, Poro Additive GmbH, opened the conference with a talk about the progress of hydratation and the structural development of hemihydrate plaster. Dr. André Schiegg, Sika Technology AG, continued with new sulphate tolerant polycarboxylate ethers for drymix mortars, in combination with retarder components. He was followed by Dr. Rüdiger ­Kwasny-Echterhagen from Kerneos S.A., who explained how new ettringitic CAC/C$ binders for self-levelling underlayments (flooring compounds, SLUs) may enable the creation of Portland cement-free SLUs.

The second session started with Markus Greim, Schleibinger Geräte Teubert u. Greim GmbH, who evaluated the many methods to determine shrinkage in mortars, with particular focus on the early shrinkage phases during the setting of the mortar. Then Dr. Peter Boos from HeidelbergCement AG presented the efforts of Milke Cement to produce tight-specification mortar for use in drymix formulations. The last talk before the lunch break was given by Mohammed Sanaobar, Wacker Chemie, who showed special cementitious tile adhesives (CTA) developed for harsh environmental conditions with high temperatures.

Dipl.-Ing. Jürgen Gänßmantel, a self-employed construction damage assessment specialist started the next session, he explained how drymix mortars may be used in all phases of the construction lifecycle as a sustainable contribution to durable construction. Then Ludo van Nes, Caltra Nederland B.V., ­talked about his tests done on several mortars where CAC or CSA cements have been used in conjunction with ordinary Portland cement (OPC; “ternary systems”), i.e. pumpable flooring screeds, SLUs, fast setting tile-adhesives and tile grouts. Finally, Dr. Margarita Perello from Dow Construction Chemicals explained a research-driven approach to develop new redispersible powders, with particular focus on the interactions with the colloid system surrounding the dispersion particles.

After the break (Fig. 4), Dr. Valentina Langella, Lamberti S.p.A., showed the principal influences of guar ethers on the mortar curing process as well as on rheology (workability) and presented the development work of a tailor-made hydroxypropylguar. Dipl.-Chem. Christian Scherer from the Fraunhofer Institut für Bauphysik Holzkirchen reported about the long-term study (commissioned by the Industrieverband Werkmörtel IWM e.V.) on the ecological behaviour of mineral mortars and ­plasters based on the work in CEN TC 351, which had been carried out in Holzkirchen from 2005–2010. The last presentation on the first day was held by Dr. Christian Trieflinger from BASF SE. He highlighted a new approach to water retention and thixotropy by using water-swellable polymers. The evening event took place at Barfüßer im Mautkeller.

From modelling to experiments

The second day started with Stefano Carrá, Mapei S.p.A., who showed a refined Finite Element Model (F.E.M.) that has been developed to analyze the stress and strain distributions in a tile-adhesive-substrate system with the ability of predicting failure conditions of tile grouts. Then Prof. Dr. Yasuhiko Sato, University of Hokkaido, presented a lecture about the performance of mortars under severe climate conditions as well as (salt) ion attacks. He was followed by Dr. Roger Zurbriggen, Elotex AG, who proposed a new test method to determine open time in cementitious tile adhesives and showed a visualisation of light interference to investigate skin formation. Dr. Karl-Jürgen Mann, Agrana Starch GmbH, concluded the session. He presented starch ethers specially modified for use in the field of construction chemicals, especially as additives in CTA, renders and other cement-based systems.

The second session on day two started with Dr. Claus-Jochen Häcker, SE Tylose GmbH & Co. KG. He presented extensive analytical investigations of tile adhesive mortars cured at elevated temperatures to achieve a more profound understanding of the chemical/mineralogical mechanisms which are responsible for the strength reduction. He was followed by Oliver Jung, Rotec GmbH, who introduced a new type of naturally expanded silicate where the open-pore structure of the material has been hydrophobized using siloxanes – a research result of the cooperation of Rotec with Evonik Goldschmidt GmbH (filed for patent). Cyrus Foster-Bey, P.T. Hutchins, evaluated experimentally the rheology of several formulations of self-levelling underlayments (SLU ’s) and their response to both controlled shear rate and stress programs.

Prof. Dr. Johann Plank and Ferdinand Leopolder summed up at the end of the event. They were pleased with the array of topics presented at the conference (Fig. 5) and particularly acknowledged the opportunities for networking and interesting side discussions (Fig. 6). Prof. Plank particularly encouraged the raw materials industry to keep working on sustainable formulations with special focus on developing modified or entirely new binder systems. Ultimately, Portland cement is still contributing substantially to the world’s CO2 emissions. The next International Drymix Mortar Conference ­idmmc four will take place on 17.03.2013 again in Nuremberg.

Mr. Leopolder invited all drymix mortar producers present to join the European Mortar Summit 2011, taking place in Paris, France, on 09.-10.06.2011 for the first time. The summit is being organized by drymix.info, the International Community for Drymix Mortars in cooperation with the European Mortar Industry Organisation EMO. The European Mortar Summit 2011 will unite chief executives of the major volume manufacturers of mortars with the leaders of globally active specialty mortar companies. “In the dynamic business environment, the borders between these two types of manufacturers anyway become vague and new high potentials also emerge in the international markets, so an executive meeting such as this summit was long overdue,” said Leopolder. 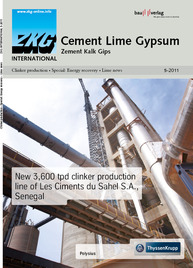 The 3rd American Drymix ­Mortar Conference (admmc three) was organized by drymix.info, the international community for drymix mortars. The conference took place at the Hilton Miami Downtown Hotel in...

The Fourth International ­Drymix Mortar Conference and Industry Showcase idmmc four takes place on the 18.03.2013 from 09:00 until 17:30 at the Kleine Meistersingerhalle. It is one of the few truly...