Malvern Instruments has marked the extension of its direct operations in Japan with a celebration held on 01.10.2010 at the offices of Malvern Instruments Japan in Kobe. This follows the conclusion of an agreement with the Sysmex Corporation, who previously distributed Malvern’s laboratory-based particle characterization systems in ­Japan, to transfer responsibility directly to Malvern (Fig.). The two companies have also signed a new exclusive distribution agreement for the Sysmex FPIA particle characterization instrument, which will make Malvern the worldwide distributor including Japan.

www.malvern.com
This article appeared in 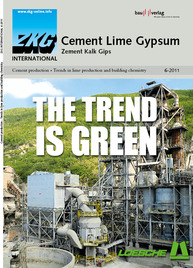 Malvern and PANalytical will be merging their activities. Both companies are owned by parent company Spectris plc and are operating companies within the Materials Analysis segment of Spectris. Both...

A series of webinars aimed at those working in the processing environment will take place during May and September 2011 as part of Malvern Instruments extensive web seminar program. Subjects covered...

A new generation of particle size and shape analyzer

The new CAMSIZER®P4 is the systematic enhancement and optimization of the well-proven CAMSIZER® system for the determination of particle size and particle shape with Dynamic Image Analysis. Based on...