The European Mortar Summit 2011 was organized in Paris by EMO, The European Mortar Industry Organisation (sector organisation of the associations of mortar producers in Europe) and drymix.info, The International Community for Drymix Mortars (Fig. 1). The summit uni­ted chief executives of the major volume manufacturers of mortars in Europe with the leaders of globally active specialty mortar companies for the first time. The programme consisted of choice speeches on the topics architecture, technology, society, sustainability and moderated disc­ussions (Figs. 2 and 3) at the end of each session.

Mr. Ludwig Soukup (Fig. 4), President of EMO, and Mr. Ferdinand Leopolder, drymix.info, welcomed the international delegates for a dinner with partners on Thursday night in a Parisian restaurant on 9 June 2011. The evening was designed to meet and get to know each other in a warm and typical brasserie ambiance.

On Friday 10 June 2011, all dele­gates met at ‘Le Pré Catelan’ in the heart of Bois de Boulogne. After the introduction by Ludwig Soukup, EMO, and Ferdinand Leopolder (Fig. 5), drymix.info, the rich programme started early in the morning.

The first session focused on challenges for the European drymix mortar industry, benefits for na­tional industry associations of being represented on the European level and future impacts of climate change on the construction industry. Jean-Luc Gardaz, President of Saint-Gobain Weber SA, opened the summit with a speech that summarized the historic evolution of industrial drymix mortars worldwide and the challenges today. The future of drymix mortars based on CEM II and CEM III, advanced formulation know how and mortar applications with jobsite machinery will help reduce the overall carbon footprint and offer overall durability and performance.

Carlos Duarte, President of APFAC (Associação Portuguesa dos Fabricantes de Argamassas de Construção, Portuguese Association of Mortar and ETICS), gave a speech about the benefit for national industry associations of being represented on the European level. He pointed out the importance of drymix mortar industry associations in order to maintain existing quality levels and to reach out for new ones. He reported about the daily work of APFAC and commented on the interaction with EMO (an umbrella organization uni­ting activities on a European level). He used the new release of EMODICO, a dictionary about commonly used terms for mortars and its applications, to illustrate the fruitful cooperation. Since early 2011, EMODICO is available online, there will be no more printed editions.

The second session started after a coffee break. It focused on the future of the European construction in the context of sustainability and new standardization process for ETICS. Ferdinand Leopolder, drymix.info, presented the preliminary report on the ‘Green Mortar Study 2011 - A Survey on Sustainability Strategies for Mortars’. The study is conducted by drymix.info in cooperation with Karlsruhe Institute of Technology KIT, aiming to investigate the influence of “green” materials on product design decisions and corporate strategies within the drymix mortar industry. Leopolder encouraged the many mortar manufacturers to participate in the study by filling in the questionnaire - if they had not already done so.

Ulrich Paetzold, FIEC (Fédération de l’Industrie Européenne de la Construction, European Construction Industry Federation) informed about the initiative for action of the European Construction Forum (ECF) „Building Prosperity for the Future of Europe“ considering the challenges from consequences of the economic and financial crisis to the global issue of climate change and its impact on humanity. This manifesto summarizes all activities in the building industry to improve materials, processes and technologies in a sustainable way.

Dr. Markus Hildebrand, EMO gave a speech about „The New Standardization Process for ETICS: Improvements and Chan­ges“, concerning External Insulation and Finishing Systems (or EIFS, also called ETICS - External Thermal Insulation Composite Systems). Earlier this year, the European Commission had decided to install a Standard for this application. Dr. Hildebrand showed the changes during the last decade and the importance of maintaining and improving benchmarks set by EOTA (ETAG 004) in the standardization process within CEN. 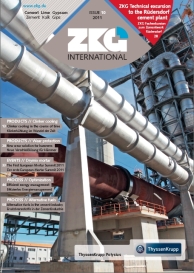