On 06.12.2011, the 1st drymix-CONVENTION took place successfully from 08:00 until 20:00 CET. It was organized jointly by Vincentz Network and drymix.info, the International Community for Drymix Mortars.

Drymix mortar experts from all over the world could receive and exchange information by means of a sophisticated online exhibition platform, which provided an exhibition hall, an auditorium, a library (document center) and a networking lounge. Active communication on the exhibition is offered via live chat, either via the public chats in the Networking Lounge and on the boothes or via the private chat function which is available for all visitors and exhibitors. In the exhibition there were 15 booths of important companies from the drymix mortar industry. The intrepid pioneer online exhibitors were Avebe, Dennert Poraver, ­Evonik, Kerneos, Laviosa, Organik Kimya, Rockwood, Rotec, Vink & Co., Wacker Chemie and ZKG International. Naturally drymix.info, also representing SEADMA and MEDMA and ­Vincentz Networks representing the European Coatings Show were present as well. Wacker Chemie was the main sponsor of this innovative and forward-looking event. The auditorium offered more than 30 on-demand lectures recorded at drymix.info events throughout the world, covering topics of interest for all regions and industry specifics. Additionally, Ferdinand Leopolder, director of drymix.info gave live lectures on the global markets for drymix mortars and greeted the attendees in several live addresses. Of the over 1100 registered delegates, close to 600 attended the show. The strongest group came from Europe, the second largest group was from Eastern Asia followed by North and South America. The exhibitor could welcome an average of 180 visitors per booth. The 2nd drymix-CONVENTION will take place on 5th December 2012, exhibitors can already sign up now. 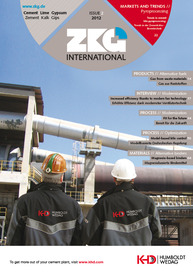 The Russian Mortar Days 2011 took place at the Moscow State University of Civil Engineering at the end of November and the event was organized by drymix.info, the International Community for Drymix...

The second online drymix-CONVENTION will be held on the 05. December 2012, globally from 08:00 to 20:00 CET. Registration is possible at www.drymix-convention.net

The first online drymix-CONVENTION will be held on the 06. December 2011, globally from 08:00 to 20:00 CET. Registration is possible at www.drymix-convention.net