Deisl Concrete in Austria, with headquarters located in Hallein 25 km south of Salzburg right on the Tauern motorway, has always been a very innovative company, and currently employs approximately 90 people. Its core business is the production and supply of ready-mixed concrete, sand and gravel, recycling material and natural rock. Its Sulzau quarry started operation during the 1970s.

Now for this location a newly acquired 80-t-crawler excavator has been put into service. As the first company in Austria, Deisl relies on this method of production and thereby new ecological and economic standards. Hyundai Dealer Mörtlbauer from Fuerstenzell in Bavaria/Germany was responsible for the major alterations to this quarry machine. The 85-ton “ECOMINER” is based on a Hyundai crawler excavator R800LC-9, which had its diesel engine removed and changed into an electric motor. In addition to the drive motor, the Mörtlbauer experts had to make changes to the air-conditioning system, hydraulics and control elements.

Today, the large device with a 5.5 m3 bucket has no exhaust emissions at all and is operated solely electrically by a 310 kW Siemens electric motor. This makes it significantly faster than the previous excavator with the former 363 kW diesel engine. In addition, the maintenance costs of the diesel engine, which reach about half of the total maintenance account for diesel-powered excavators, are completely eliminated.

The rebuilding work was done in three months in close coordination with Hyundai Heavy Industries (HHI). It also included the new CE certification of the excavator, which thus corresponds to all European regulations relating to the implementation of work protection and safety.

The large excavator loads rigid dump trucks with nearly 100 tons payload in five cycles in only about 4.5 min and moves about 800 000 tonnes of material annually.
www.hyundai.eu 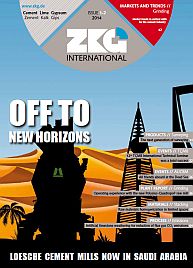 At this years steinexpo in Homberg, Nieder-Ofleiden/Germany from 03.-06.09.2014, Liebherr from Biberach/Riss presented large items of equipment from the earthmoving programme and, for the first...

The Austrian sustainability award in the category Economy  best practice in raw material quarrying and operational pro­cedures went to the quarry Ofenauerberg in Golling/Austria of the LEUBE...