CRH Roadstone Limited is one of the oldest producers of cement and concrete products in Ireland. At the Waterford facility, front loaders transport screen limestone dust and sand from the quarry to the tiered loading area secured by a tall retaining wall. Next to the wall, the 7.31 m high split pyramid hopper is comprised of two square bins with inverted pyramid-shaped discharge points at the bottom, which unload onto separate conveyors leading to either the concrete block production facility or the cement processing plant.

With shallow base slopes and sharp corners, the bins in the pyramid hopper have a tendency to accumulate damp material. After the front loader was done dumping and discharge would stop flowing onto the conveyors, operators assumed the bin was empty, but material remained within, forming a rathole that got smaller as more material collected. Seasonal fluctuations in production caused raw material to sit dormant, exposed to the moist Irish climate. The material hardened over time, adding to the problem, as the weight can compromise the balance and structural integrity of the hopper, becoming a potential hazard to the work area.

Regular clearing of the obstruction required the time-consuming use of a mechanical digger, which scooped material out of the open mouth of the hopper from the loading area above. To get away from this cost-intensive, time-consuming and sometimes dangerous duty, a solution to address ratholing and clogging of limestone dust in the main hopper had to be found. Complicating the plan was the fact that one side of the hopper abutted the retaining wall.

Fed up with the downtime and maintenance costs, CRH Roadstone contacted a local engineering firm, Plimley Trading Limited of Newbridge, Ireland. As a distributor of products made by Martin Engineering from Neponset (IL), USA, Plimley also invited the flow products manufacturer into the process to help devise a cost-effective solution.

The planners came up with an innovative approach that set two 100-liter Martin® XHV Air Cannons at the back of the bin. These work in tandem with a single, larger 150-liter XHV Air Cannon fitted to a split blowpipe manifold, which is connected to fan jet nozzles on the front sloping side of the bin. All three units are fitted with a 102 mm quick exhaust valve (QEV) connected to the on-site compressor system 10 m away. Plimley also supplied and installed a new airline to feed the air cannons.

“This is the first application of the split manifold system on heavy, sticky material that I know of,” observed Dave Harasym, UK Sales Manager for Martin Engineering. Generally, this technology is used on light material such as fly ash. ”Proper flow from a square bin typically requires four cannons, one on each side firing simultaneously,“ Harasym continued. ”We were losing one side to a retaining wall, so figuring out how to do it with three cannons was a challenge.”

The XHV features a rugged 16 mm stroke piston with a high-temperature polymer seal for long life. Working from one side of the tank, the complete valve assembly can be removed in one easy step and replaced within minutes, eliminating the need to ever remove the tank from the vessel for service.

Each unit is activated with a new type of 110-volt, negative-firing solenoid, which provides the power, efficiency and easy maintenance of an advanced internal valve with the single-line plumbing of a traditional valve design. Installers also devised a mechanism by which the discharge volume from the bin determines the firing sequence for the system. “On the block side outlet, the flow of material is controlled by a swinging door that drops the material into a weigh hopper,” explained CRH Roadstone Plant Operations Manager Hugh McGee. “When the door opens, the air cannon discharges the compressed air into the bin. This happens every time the door opens and keeps the material flowing.”

On the concrete side, there is no door on the bottom, so discharge is controlled by a swinging flap placed over the conveyor that responds to material on the belt. If dormant, the flap operates a switch, which triggers the cannon. This ensures  that material is continually flowing to the belt with little monitoring or labor.

Since installation in February 2014, the company has not reported a single instance of ratholing in the hopper, and no need for clearing an obstruction. 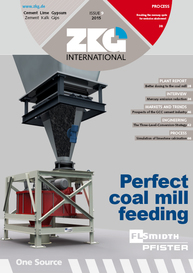 At Knauf Drywall, Immingham/Großbrittanien (Fig.), problems of material hang up in silos and hoppers occurred within the plant. One such trouble spot was within a 6 m long twin screw discharge...

The Boot-Lift Railcar Connector from Martin Engineering improves the speed and safety of connecting a hopper car to under-track conveying systems, preventing the loss of material to wind or...