The close proximity to the main associations of the chemistry and construction industry is also an expression of the close content networking, which will intensify the German building chemistry industry with the new office at European level. As a link between the activities of the German Construction Chemicals in Frankfurt and Brussels, the range of tasks for Martin Ludescher mainly includes obtaining information about prioritized issues of the Association, research and preparation of position papers and statements for the Board and the management based on European issues of the branch. “Most important is to keep intensive contacts with the decision makers in the European committees, to business associations and international institutions which deal with the construction industry and construction chemicals,” says Norbert Schröter, as General Manager of the German Construction Chemistry very often in Brussels itself.

MMag. Martin Ludescher graduated at the Vienna University of Economics with a focus on socio-economics and public management with a master´s degree. In a second master’s degree, he graduated from the University of Vienna in political knowledge with a focus on European politics. Subsequently he was, inter alia, employed with the European Commission.

Current theme of the EU Commission, i.a., is the development and use of a uniformed label “Environmental footprint for products” (PEF). Currently, pilot projects to test the PEF method are running, including for insulation materials and metal products. From the perspective of the German Construction Chemistry it is noted that for construction products a number of environmental product declarations (EPD) according to a harmonized standard 15804 have been developed and applied. “Therefore, it should – as well as the position of the entire group of building products manufacturer – under no circumstances be re-invented the wheel”, says Norbert Schröter. A compromise proposal would be to moderate the adaptation of EN 15804 to the criteria of the footprint. The Technical Committee (TC) 350 at CEN has already taken the first steps in this direction.

“Useful actions for the German construction chemistry in my view is the active participation at European level, involving monitoring and close monitoring of PEF development”, explains Ma­rtin Ludescher. The BDI just created a position paper on this complex. An involvement of the German construction chemistry is already facilitated by the accommodation with the BDI in the same building in Brussels.”

The German Construction Chemicals Industry Association represents the entire construction chemistry industry in Germany. The spectrum of the 130 member companies ranges from the small and medium-sized specialist company to the global enterprise. With around 7.8 billion Euros in annual sales, these companies account for half of the European market volume and about a quarter of the world market. Under the roof of the VCI, the German construction chemistry represents the interests of its member companies with respect to the professional public, politics, national and international agencies and institutions. 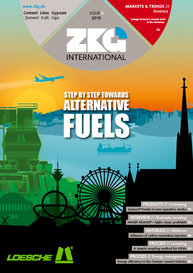 To support the professional ­redevelopement of the flood damage of summer 2013 in ­Eastern and Southern­ Germany, the German Construction Chemistry Association as authoritative ­association for...

German lime industry in dialog with Berlin and Brussels

Intensive interchange of opinion and ideas with political decision-makers, and with members of the federal government and the European Commission, is one of the central tasks of the Association of the...

The annual conference of the Chemistry of Construction Materials Division of the GDCh (German Chemical Society) held in Dübendorf/Switzerland  and thus, for the first time, outside of Germany ...