These imponderables and the high costs of energy supplies for the energy-intensive lime industry, and the search for alternative energy suppliers, both closely linked to the continuing pandemic and the war in Ukraine, along with other supply-chain shortages signify great challenges for the lime industry, among others. Also to be added are inflation, the interest-rate trend and the threat of a global recession.

Research and the quest for alternative energy solutions are thus both in the focus of the lime industry, but must be supported, necessarily, by long-term structural political provisions for assurance of energy markets and the acceleration of the energy turnaround.

The target of climate neutrality by 2045 is closely related to the solution of the energy turnaround. Here, the lime industry has bindingly undertaken in its joint roadmap to produce lime products in all plants with no emissions of CO2, i.e. climate neutrally, by 2045. The path to this aim is signposted by three technological routes. Many BVK members are already participating in specific projects for biogenic fuels, the production and use of green electricity and CO2 elimination technology, and ambitious decarbonisation.

The core element of the roadmap is the separation and further processing or injection of our two-thirds feed-material-induced, non-reducible CO2. Prof. Eckehard Specht’s packed-bed reactor for CO2 removal at the University of Magdeburg is a central element in this concept. The joint AiF-IGF research project has been conducted between the Otto-von-Guericke University of Magdeburg and the Ruhr University Bochum during the past two years, researching the fundamentals for the now tangible future implementation of the process-engineering for CO2 removal on a living-lab scale located directly at a lime plant. The planning, design and scaling of the living-lab project was completed, again in cooperation with the University of Magdeburg, during 2021 and culminated in the submission in the spring of 2022 of the project application for the federal economics ministry’s promotion program “Decarbonisation in industry”, the initial phase of which has now been approved.

The living-lab project is now to be conducted by a consortium of numerous German and Austrian BVK members in cooperation with the Electrochaea GmbH biochemical start-up. Electrochaea will perform the CO2 utilisation (CCU) part of the project and convert in a bioreactor the concentrated CO2 waste-gases into biomethane, which could be used, given industrial implementation, to fire the lime burning kiln or serve otherwise as a fuel.

The project examined here is of critical relevance, since the CO2 removal technology to be researched as an end-of-pipe solution for the removal of non-avoidable process-induced CO2 can be used on practically all existing lime burning kilns and also, on a supra-industry basis, for other CO2 sources. This potential brings the lime industry a decisive step further toward the objective of “Climate positive industry through climate neutral production” as enshrined in the roadmap.

The guest speaker at the meeting of members was Prof. Dr. Ralph Watzel, President of the Federal Institute for Geosciences and Natural Resources (BGR). In his address, entitled “Does resources recovery in Germany still have a future?”, he examined not only the federal government’s mineral resources strategy but also discussed intensively the questions of the acceptance of mineral-resources recovery and the potentials for gas production in Germany, CO2 infrastructure and CO2 injection. The BGR, as a central research and consulting institution of the federal government in the field of geosciences and mineral resources, devotes its attention, in particular, to the resources-industry and to geo-scientific advice for the federal government and German industry for long-term assurance of mineral resources and energy supplies for the Federal Republic of Germany and for the sustainable management of geo-resources. It is also a close partner of the lime industry in the assurance and mineability of mineralogical resources.

New chairman of the Association of the German Lime Industry

On 1 July 2022, the meeting of members of the Association of the German Lime Industry resolved upon a reorganisation of its chairmanship. Thomas Perterer, CEO of Lhoist Germany Wülfrath, takes over the chair, while the previous first chairman, Dr. Kai Schaefer, Managing Shareholder of family-owned Schaefer Kalk, will, in future, act jointly with Dr. Burkhard Naffin, CEO of Fels-Werke GmbH, as the deputy chairman of the BVK.

Perterer thus also takes over, following his assumption of the management of Lhoist Germany on 1 April 2022, the chairmanship of the Association of the German Lime Industry and will thus in future also represent the interests of the lime industry at association level.

Thomas Perterer has already been working in various managerial posts for Lhoist, Germany’s largest lime producer, for more than eight years. He had previously been a manager and consultant working internationally for the cement and construction industry. The BVK is pleased to have available to it the knowledge of another long-serving industry expert in the lime industry and considers Perterer to be an optimum appointment to this post in especially challenging times. The main focuses of the three-man Board of the Association of the German Lime Industry will, together with the senior director, Martin Ogilvie, continue the support of the transformation in the lime industry via climate-neutral production into a climate-positive industry, the solution of energy supplies for this energy-intensive industry, and the assurance of production locations.

Sincere thanks here to Philip Niemann, who supported the Association of the German Lime Industry as deputy chairman until April 2022 and has now relocated to the USA as a result of a career change, now taking over as the CEO of Lhoist North America and therefore no longer able to exercise his responsibilities as deputy chairman.

The Board of the Association of the German Lime Industry has appointed Dr. Klaus-Ruthard Frisch to the post of Technical Director with effect from 1 July 2022. Dr. Frisch studied Mining at the Clausthal University of Technology and is optimally equipped for his new duties, having more than twenty-five years of professional experience in associations and in industry in the fields of environmental protection, climate protection, the energy industry, industrial and plant safety, and the setting-up and introduction of management systems. His work as a freelance auditor will not least of all benefit him in cooperation with customers of the Institute for Lime and Mortar Research. He is also accustomed to networking with authorities, ministries, standardisation organisations and industrial associations, and also has committee work experience.

His focuses and targets as Technical Director will comprise the support of all technical projects of BVK and its subsidiary institutes. A further emphasis will also be representation of the BVK within our European association, the EuLA. Future-orientated projects for Carbon Management will also be a focus for the CO2-intensive lime industry. Here, a sincere “Thank you” to the previous Technical Director, Dr. Sven-Olaf Schmidt, who departed on the grounds of age at the end of June after many years of activity on behalf of the Association of the German Lime Industry. 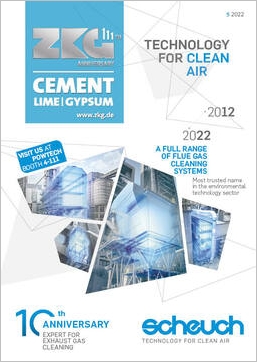 CO2 avoidance and climate protection are the issues and the central challenges of the 21st century. When it comes to this question, everyone is affected and called upon to act  as individuals, as...

Transnational Call for Action on Carbon Capture and Storage (CCS)

In an open letter, Bellona Germany, Heidelberg-Cement, General Electric, the Federal Association of the German Lime Industry and the German Cement Works Association, among others, call on the Dutch,...