At the end of September, Kirchdorfer employees and shareholders, plus representatives of local authorities, came together to celebrate the company’s 130th founding anniversary. Eva Hofmann, majority shareholder and great-great-granddaughter of founding father Adolf Hofmann, gave a speech extolling both the generations of outstanding rapport between the two founding families and, not least, the outstanding performance of the company’s employees. Managing Director Mag. Erich Frommwald took the opportunity to thank his colleagues as well as the entire Kirchdorfer staff.

Tradition and Innovation since 1888

Actually, the cement plant’s history extends all the way back to the early 1880s, when the two founders happened upon some promising limestone deposits during construction of the Kremstal railway. Not least in order to make good use of the new railway’s capacity, they applied for permission to build a cement plant directly adjacent to the Kirchdorf railway station, and the plan was approved within a very short time. On 24.07.1888, the “Portland-Cementwerk Kirchdorf, Hofmann & Comp.” was entered in the commercial register, and production commenced with a workforce of 244 employees. Since then, the pioneering spirit and sense of local responsibility of the legendary founding fathers Hofmann and Dierzer have run like a red thread through the company’s entire history. From the region’s electrification with the Steyrdurchbruch power station more than a century ago to the more recent construction of a district heating system for local households, the company has always stayed ahead of the times: As early as 1958, the plant’s dust emissions had already been almost completely eliminated by electrostatic precipitators. Instead of coal, the plant used gas as fuel and was able to supply Kirchdorf with district heating. Then, in 1997, the world’s first pilot catalytic converter for the cement industry went into operation. Continuing on in the years to follow, a further number of special, logically consequential measures were instituted, particularly with regard to pollutant emissions and air pollution control.

The cement plant made history again in 2016 by setting new standards in cement production with a DeCONOx plant for industrial exhaust air purification & heat recovery. The entire waste-heat energy yield is now fed into the local district heating network that serves more than 800 households all year round.

To date, more than 20 million t of cement has been produced at this very traditional plant. The Kirchdorf-based company also set some new records in 2018: Averaging some 1100 t of clinker per day, the company achieved its highest kiln output ever – and did so with an alternative fuel share of more than 90 %. To this day, environment-friendly production and the development of ecologically sound products continues to play a crucial role at Kirchdorfer Zementwerk - a plant that turns out numerous special products that set sustainability standards for the industry while conserving environmental resources to the greatest possible extent. 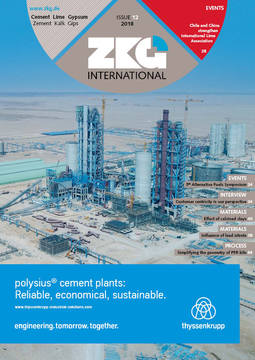 On September 29, in the presence of numerous distinguished guests from the realms of politics, industry and commerce, as well as customers, staff and suppliers, Kirchdorfer Zementwerk officially...

A cement plant doesnt necessarily have to be a grey and dusty affair   at least if you ask Erich Frommwald, CEO of the Kirchdorfer Group. After a number of innovative measures regarding...

One of the cleanest cement plants in the world

ZKG: The new DeCONOx system installed at Kirchdorfer Zementwerk counts as the worlds first industrial-scale plant of its kind, making you a pioneer in the use of this technology. What made you...