Jørgen Huno Rasmussen, Group CEO of FLSmidth & Co. A/S since 2003, has decided to retire mid 2013, 10 years after joining FLSmidth as Group CEO. His successor will be Thomas Schulz, who has been appointed new Group CEO. He is ­expected to take up his new position no later than 1 June 2013. Schulz works currently as President of Sandvik‘s Construction ­business area.
www.flsmidth.com
This article appeared in 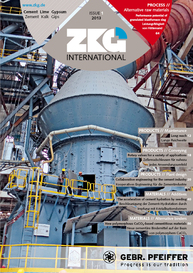 Thomas Schulz, FLSmidths Group CEO, has made the decision to take a role outside of the company, and will therefore step down as FLSmidths CEO by the end of 2021. Mikko Keto, who joined FLSmidth...

In mid 2013, Dr. Thomas Schulz was appointed as the new Group CEO of FLSmidth & Co. A/S. ZKG INTERNATIONAL had the opportunity to meet with him at the groups headquarters in Copenhagen and to...

Effective from 01.07.2018, FLSmidths organisation will consist of two industries  Cement and Mining  supported by a regional setup to strengthen customer focus and life-cycle solutions ...