The company Thorwesten Vent from Beckum, Germany, has been working in the constructional explosion protection business for the grinding and storage of solid fuels such as coal and pet coke for several decades, mainly for the cement and lime industry as well as the coal gasification industry, and has specialized in the production of self-reclosing explosion vents and ducts. Also part of the service portfolio of the company is the refurbishment and modernization of existing plants as well as after sales service. Research and development of new concepts for explosion protection are also a main focus for the company.

That a focus on research and development usually pays off in the end can be seen in one of the company’s latest projects in Gabun in Africa. Here the specia­lists at Thorwesten Vent were asked to modernize the existing decoupling solution within the coal grinding section. For the first time the engineers were able to use Thorwesten Vent’s own innovative and patented decoupling concept for cylindrical bag filters (Fig. 1).

Another advantage: Thanks to the concept design and the resulting flow behavior, even the smallest particle will be efficiently separated from the milling products before the actual filtering process. Bigger and heavier particles will fall into the filter cone which leads to a longer service life of the filter as these particles can no longer cause harmful abrasions.

Further advantages of the Thorwesten Vent concept include the utilization of the – by norm EN 14491 – allowed maximum limited reduced explosion pressure of 2barÜ for cylindrical bag filters. This leads to the pressure relief area being reduced to the allowed absolute minimum. Another important advantage is the minimum activation pressure of the vents which is as low as 20 mbar. As a result to vertical decoupling, in case of an explosion no harm is done to any personal or plant parts. Repulsive forces will be – opposite to the decoupling direction – vertically discharged into the supporting structure. 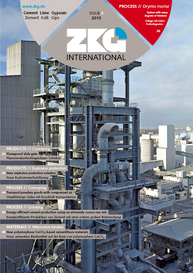 1 Introduction Coal is still considered the most important fuel for the manufacture of cement, lime and gypsum. In the German cement industry, despite the increasing use of secondary fuels, the...

In order to secure the fuel supply for the rotary kilns used for the production of quicklime in the Flandersbach plant, Rheinkalk GmbH has commissioned S­ilobau Thorwesten with the construction of a...

To ensure the safety of burn processes in the industrial sector of heat gain or power supply the selection of ­varied fuels becomes more and more important. The usual storage and containment of such...

Thorwesten Vent, active in the field of constructional explosion protection, has received a contract for the design and assembly of a large capacity silo for the storage of pulverised lignite at the...