In July 2011, HeidelbergCement officially opened its newly built cement plant TulaCement in the presence of a large number of guests. The plant, which is located approximately 150 km south of Moscow in the city of Novogurovsky, in the Tula region, has a production capacity of 2 million t of cement. Construction of the plant began in April 2009. The investment costs for the new plant, which employs around 400 people, amount to approximately 300 million €. “Russia is an attractive market for HeidelbergCement,” emphasises Dr. Scheifele. “The demand for cement is rapidly increasing. It is anticipated that cement consumption will rise from 50 million t in 2010 to around 70–90 million t in the next ten years.” www.heidelbergcement.com 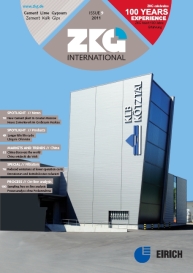 Schenck Process has equipped another HeidelbergCement plant with its LOGiQ® automated logistics solution. The plant, which went into operation in June 2012, is located in Tula/Russia, around 150 km...

HeidelbergCement has been active in Eastern Europe for more than twenty years. The groups Eastern Europe-Central Asia region, for which management board member Andreas Kern is responsible, serves...

A cement kiln at the Ribblesdale plant of HeidelbergCements subsidiary Hanson UK has successfully been operated using a net zero fuel mix as part of a world-first demonstration using hydrogen...