Improving underlying economic fundamentals, the existence of large pent-up demand balances, and the diminishment of economic fiscal cliff uncertainty will combine to result in strong growth rates in 2013 and an increase in cement consumption. According to the latest forecast from the Portland Cement Association (PCA), there will be an 8.1 % growth in cement consumption in 2013, significantly higher than the tepid growth projected in its fall 2012 report. The upward revisions reflect adjustments made in light of the recent fiscal cliff accord, recognition of stronger economic momentum, and markedly more optimistic assessments regarding residential construction activity. The January report marked 2012 consumption at 78.5 million metric tons, an 8.9 % compared to 2011.
“Growth in 2013 cement consumption will be largely ­driven by gains in residential construction,” said Ed Sullivan, Chief Economist at PCA.
Sullivan did caution, however, that the first quarter of 2013 would actually show declines compared to the same period in 2012. “It is important to point out that this potential decline in first quarter growth rates does not signal a weakening in market fundamentals, but rather a hangover from favorable 2012 weather conditions. Stronger gains in cement consumption growth are expected during the second quarter.”
The accelerated consumption predicted during the second half of 2013 should carry into the following year.  PCA projects an increase of 8.3 % for 2014.
PCA also upwardly revised its long-range projections for 2015–2017. Annual growth during that period is expected to be as high as 9.2 %. Cement consumption is dictated by the level of construction activity and by the prevailing cement intensity.´While 2017 cement intensity levels remain well ­below the pre-recession averages and upside risks remain, these risks have been significantly reduced.
www.cement.org
This article appeared in 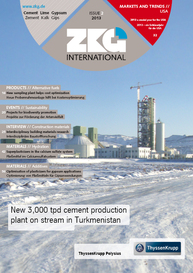 The Portland Cement Association (PCA) released its annual Spring Forecast which envisions strong to moderate growth for cement consumption through 2019 and into 2020. PCA Market Intelligence expects...

PCA expects a gradual and sustained U.S. economic recovery (Figs. 1 and 2) fed by growing confidence among business and consumers  leading to gains in consumer spending and job creation. Job gains,...