Sika is investing around CHF 2.2 million in the expansion of its production site in Bludenz/Austria. A new warehouse and a new manufacturing line for waterbars is being added to the existing site.

Sika is not just expanding its production capacities and warehouse space with the two-story warehouse, which has 1800 m² of useable floor space; it is also creating eight new jobs. The site currently has a workforce of 75 employees. Sika has been producing construction chemicals in Vorarlberg since 1939, and has been continuously expanding the site since then.

Sika is positioning itself more broadly in Bludenz with the new manufacturing line, which will produce around 600 000 running meters of waterbars each year. Waterbars are used to waterproof buildings and other structures. Around 40 000 t of construction chemicals such as mortars, synthetic resin floor coatings, concrete admixtures, waterbars and release agents are manufactured each year in Bludenz for the Austrian market plus other countries in Central and Eastern Europe. 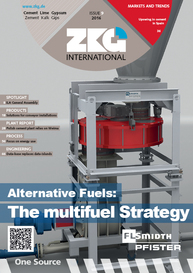 Sika is expanding its production capacities in Southeast Europe by bringing a further mortar facility as well as a warehouse for raw materials and end-products on stream at its Simanovci site in...

Sika is starting operations at a plant in Doha/Qatar for the production of concrete admixtures. The country on the east coast of the Arabian peninsula is an attractive market thanks to large?scale...

Sika is to acquire the global concrete admixture and cement grinding aids business of the Italcementi Group (directly or indirectly controlled by Italcementi or ­Ciments Français), which are on the...

Sika is starting the operations of a new mortar plant at its existing site in Addis Ababa/Ethiopia, thus expanding its portfolio of locally manufactured products. After building a production facility...

Sika has opened a technology center ­focusing on the further and new development of mortar products in Rosendahl/Germany. Following a construction period of 14 months, it was inaugurated in an...