This was the theme chosen by Reinhard Schultz, Member of the German Federal Parliament, in the invitation to a round-table discussion in Ennigerloh/Germany on 23.01.2009. The background to this event was the decision reached on 12.12.2008 by the European Council of Heads of State and Government regarding the EC directive for Emission Trading from 2013. Compared to the proposals that had been made by the EC Commission, the actual Directive contained some decisive improvements from the point of view of CO2 and energy-intensive industries.

After an opening address by Thomas Trampe-Brinkmann, Member of the State Parliament of North Rhine-Westphalia, Reinhard Schultz spoke on the subject of “Industrial Policy and Climate Protection”. He pointed out that CO2 emissions not only originated from industrial sources, but are to a large extent caused by the private sector. Andreas Kern, Executive Board Member of HeidelbergCement AG and President of the Federation of the German Cement Industry e.V., then described the present status of the decision-making process. He emphasized that the European cement industry is responsible for only around 0.3 % of global emissions, and that the worldwide cement industry causes 5 % of total emissions, China alone being responsible for 2.5 %. Despite this fact, the Chinese had certainly made progress, particularly with regard to reductions in energy consumption, for instance through the utilization of waste heat from kilns. The viewpoint of other affected sectors of industry was subsequently presented by Ulrich Freese, Vice Chairman of the Union of Mining, Chemical and Energy Workers. One of his points was that CO2 was not necessarily to be regarded solely as a waste product but can also be seen as a valuable resource.

According to Kern the industrial sectors threatened by carbon leakage – one of which is the cement industry – will be granted gratis emission rights until 2020.The rights will be allocated on the basis of a still to be defined benchmark that will be based on the best available techniques. Moreover, the EC Commission has until the end of 2009 to compile a list of industrial sectors that are threatened by “carbon leakage”. In future, the respective industry sectors will be revaluated every five years.

ZKG: Mr. Kern, how do you see the future of the German cement industry?
Andreas Kern: Thanks to the national economic stimulus packages, German cement manufacturers anticipate a stable development this year, in spite of the current financial crisis. For 2009 we expect the same level of cement consumption in Germany as in 2008, i.e. about 27.4 million tonnes. After decades of recession on the construction sector, cement producers feel well placed to master the present crisis. We did our homework a long time ago, cutting costs and adapting productivity and production capacities. The two current economic stimulus packages introduced by the German Federal Government will significantly increase the construction investment volume, particularly on the civil and underground engineering sector. That will greatly benefit our industry. However, we are still worried by the continued increase in energy costs, which make up a major portion of our production expenses.

ZKG: Is it certain that the cement industry will receive emission certificates on a gratis basis?
Kern: After negotiations in the EC Council in December 2008, the way was cleared at a European level for the implementation of emission trading as from 2013. The fundamental outcome is that major segments of the CO2-intensive industries, which also include the cement industry, will be exempted from the full auctioning of certificates. This means that up to 2020 certificates will continue to be issued free-of-charge – although the quantity available will be reduced by 21 %.

ZKG: Does the same apply to the lime and gypsum industries?
Andreas Kern: The decision made in principle by the EC Council that energy-intensive industries should be exempted from the auctioning also fundamentally includes the lime industry. The scope of the emission trading system will be extended. This will additionally include the gypsum industry, among others, in emission trading.

ZKG: Emission rights will be allocated on the basis of benchmarks. What will this involve, exactly?
Andreas Kern: The allocation of emission rights on the basis of demanding but fair benchmarks would make emission trading more specific and cost efficient. We are in the process of developing these benchmarks on the basis of upper CO2-emission limits taking consideration of process-determined emissions that are not reducible (10 % of the best available technology in Europe). In this connection, we are paying special attention to distributing the total reduction obligation of minus 21 % over the various sectors.

ZKG: What general trends do you see for cement plant engineering in Germany and in Europe?
Andreas Kern: In order to cushion the rapid increase in costs for fuels such as coal and gas, but also for electrical power, raw ­materials, transportation, spare parts and machines, the overall efficiency of production plants will be further improved. Another trend is certainly the refurbishment and modernization of filter systems in order to meet the most stringent emission reduction standards. At a European level, considerable progress is being made with the substitution of primary fuels by secondary fuels including biomass energy. In order to assure their long-term needs for secondary fuels, many companies are forming close partnerships with waste management companies.

ZKG: In Germany the clinker/cement factor is still rather high compared to our European neighbours. What other additive materials (apart from granulated blast furnace slag) could be used in order to reduce the clinker-cement factor?
Andreas Kern: Blended cements, in which the lower clinker content is reduced, for instance, by adding fly ash or limestone, are gaining an increasing share of the market. In some cement types the clinker content is already significantly lower than 70 %.

ZKG: Thank you very much indeed for the interview. 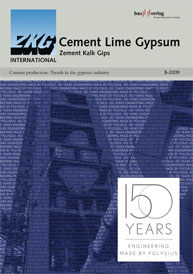 The World Cement Association (WCA) has announced that the artificial intelligence company Carbon Re has become the latest addition to its international community, joining as an Associate Corporate...

NOx and SO2 trading

An independent study by Ecofys/Emission Care (commissioned by CEMBUREAU) has been launched on the consequences which an industrial NOx and SO2 emissions trading scheme (ETSii) could have on the...

The World Cement Association welcomes Meghna Group of Industries, Unique Cement Industries Limited, to its international membership. The company is one of Bangladeshs biggest conglomerates and will...