Fritz & Macziol has now reached another important milestone in the rollout of the logistics system VAS at Lafarge MENA. With the final acceptance in the Lafarge Emirates cement plant, another key project has started operation in the Near East. Overall, seven cement plants belonging to various companies are now working in Saudi Arabia, the Emirates and Syria with the logistics solution from Fritz & Macziol. The launch was realised in the shortest time using a template, which has been specially modified to Lafarge’s processes. The excellent and professional cooperation between Lafarge and the Fritz & Macziol project team made a critical contribution to this fast implementation. “We were able to start the further optimisation process with the demonstrably tested and process-oriented software,” the project manager Hossam Amer at Lafarge Emirates reported. For Lafarge, therefore, the investment in the development of the VAS Lafarge template, with which it was possible to rollout the solution globally in 22 plants, was worth it. All solutions work integrated into ­Lafarge’s central ERP system from J. D. Edwards/Oracle. Care of the VAS system is ensured by Fritz & Macziol via a corresponding service agreement. For installations in the Arab world, the VAS user interface has been designed in such a way that the terminals for the drivers and dispatch staff, who speak in Arabic, can also be used from right to left. The hardware also had to be modified to suit the climatic conditions in the Arab world, where temperatures can reach more than 40 °C in ­summer.
www.fum.de
This article appeared in 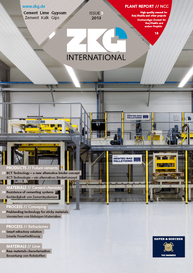 The Phoenix Cement Works Krogbeumker GmbH & Co. KG (Fig.), a long-established company within the Westphalian cement industry, has decided to introduce the VAS IT logistics system by Fritz & Macziol....

The Java-based logistics software VAS® from FRITZ & MAC­ZIOL supports both automation and safeguarding of despatch and supply processes in the raw and bulk materials industry. With VAS 5.0® a new...