PANalytical, one of the world’s leading suppliers of analytical X-ray equipment and software has launched a new version of HighScore (Plus), their proven powder diffraction analysis software. A number of major changes have been introduced and provide users with several brand-new functions, making their lives a lot easier.

HighScore covers qualitative and quantitative XRD phase determinations, crystallographic analysis, all kinds of profile and phase fits up to charge flipping structure analysis, as well as statistical methods to evaluate a very large numbers of scans. All functionality is in one consistent graphical user interface, and is supported with extensive online help and tutorials, making the software unique of its kind. HighScore can read virtually all powder diffraction data, including formats from all major diffractometer brands and beamline formats. For these reasons, HighScore has become the software of choice for many X-ray laboratories in universities and industries alike.

The new software version contains a number of new functions such as: partial least squares (PLS) regression to predict data from observed scan variations (data mining), calculation of element or oxide concentrations from phase quantities and the use of spherical harmonics to describe complex preferred orientations. A unique bitmap-to-scan converter and the unrivalled scripting functionality contribute to HighScore’s excellence.

Product marketing manager XRD Martijn Fransen says: “Due to the completely rebuilt refinement engine (the Rietveld kernel), previous limitations for the number of atoms, peaks, phases or data points and for overlapping peaks, have been eliminated completely. It is now possible to fit asymmetric peaks (via split-peaks) and to mix structure fits and profile fits in one refinement. HKL phases and automatic fitting batches are supported and last but not least the profile fit is very fast and stable. HighScore 4.0 is now ready for the future.”

HighScore version 4.0 is now avail-able with the former HighScore Plus functionality as ‘Plus’ option on top of the more basic HighScore package. 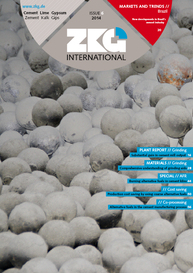 Panalytical, a supplier of analytical X-ray instrumentation and software, announces the launch of Aeris, their new X-ray powder diffraction (XRD) benchtop instrument. Ease of use and maximum benefits...

GaliPIX3D  a new detector for X?ray diffraction with hard radiation

PANalytical from Almelo, the Netherlands has released a new detector for X?ray diffraction (XRD). The new GaliPIX3D will be shown on PANalyticals flagship X-ray diffractometer, Empyrean  the...

PANalytical announces the launch of Aeris, their new X-ray powder diffraction (XRD) benchtop instrument. Ease of use and maximum benefits for the user are the key aspects of this newly developed...

Malvern and PANalytical will be merging their activities. Both companies are owned by parent company Spectris plc and are operating companies within the Materials Analysis segment of Spectris. Both...

From 28.03.30.03.2011 a Building Materials Analysis meeting will be held at the Fachbereich Geowissenschaften FG Mineralogie/Geochemie Martin-Luther-Universität Halle/Wittenberg/Germany. It is...