Cemtec Cement and Mining Technology GmbH is a leading manufacturer of dry and wet mills for the cement and mining industry with over 30 years of experience located in Enns/Austria. Its portfolio spans from single machines, spare parts and engineering services to the erection and commissioning of turnkey projects in the cement, mining and recycling industry. One of Cemtec’s strengths is retrofitting existing plants with state-of-the-art equipment. Since the early seventies modern air classifiers are applied to perform cement grinding in closed circuit. The first separators in that field of application (1st generation classifiers, see Figure 1) were characterised by one single motor driving both an air fan and the separator wheel. While those classifiers were quite compact in terms of footprint the separation efficiency was poor.

Cemtec was awarded a contract for the replacement of the dynamic separator in a cement grinding plant in Germany with a modern third generation separator (Cemtec CTC-0075). Included in the scope was the dismantling of the old separator, adapting the existing separator building and equipment, and installation of new equipment. As an experienced producer of turnkey plants, Cemtec is used to challenging projects and was able to create a compelling offer for this highly competitive project.

Cemtec guaranteed a significant reduction of the fines in the reject stream of the separator and therefore a reduction of specific energy input based on data provided by the customer Sebald Zement. With the replacement, the customer also had the option to expand the product portfolio to include higher cement qualities, which could not be produced with the existing separator due to restrictions in cut size. The Cemtec CTC series is able to achieve cut sizes down to 16 µm (98% passing) and therefore ideally suited for this task.

The existing cement mill with the dimension ø 2.8 x 13.75 m is equipped with two chambers and has an installed power of 1500 kW. In 1975 the mill was equipped with a Polysius first generation separator.

Based on the data provided by Sebald Zement during the offer phase it was decided to replace the existing separator with a 75000 m³/h Cemtec CTC-0075. The new separator would be used in a closed air circuit with two dedusting cyclones, which remove the main part of the finished product from the separator air stream. 10% of the nominal separator air flow is dedusted via a bag house filter to remove the finest particles. Together with the product of the existing mill dedusting system, the cyclone and the filter products comprised the finished cement, which is transported to the cement storage via existing equipment. Figure 3 shows the flowsheet of the complete cement grinding line, with new and modified equipment shown in blue and orange.

Detail engineering started in May 2019 directly after signing the contract to prepare everything for the planned shutdown at the start of 2020. With the replacement of the existing separator the customer also decided to replace the reject belt conveyor from the separator to the mill inlet with an air slide, as the conveyor was a source of heavy dust emission. To achieve the necessary height difference for the operation of the air slide the new separator and the roof had to be raised compared to the old layout. This resulted in the necessity to lengthen the existing 45 years old bucket elevator to reach the feed height of the separator. In addition to the changes mentioned above, the cyclone in the mill dedusting system was removed so as to accommodate the new filter for the air separator. To monitor the circulating load in an accurate way a slide scale was installed at the discharge of reject air slide.

The specific challenges with this project lay within the short time frame for the engineering tasks, the limited space at the construction site due to the historically grown plant structure, the immediate vicinity of the train tracks and the limited time window for the execution of the works. Project staff needed to consider all the subjects above to guarantee a smooth and timely execution. Cemtec finished engineering on time in September of 2019 despite the complexity of the project and some additional difficulties due to incomplete documentation of the old equipment. All equipment was sourced at renowned suppliers from Europe in accordance with the customer’s specifications and quality requirements.

The operating conditions of cement mill 3 were mostly known because of data the customer already provided during the offer phase and previous site visits of Cemtec engineers. To get a more comprehensive picture and a basis for the comparisons, Cemtec conducted a detailed joint investigation in November of 2019. This included sampling of the grinding plant while concurrently recording the operating parameters and measurement values of the plant. During the on-site period at the start of November 2019 mill outlet, separator fines, separator coarse, filter dust and the finished product were sampled for two different cement qualities. Additionally the raw materials clinker, limestone and gypsum were sampled to have a complete picture of the grinding line.

The analysis of the samples was conducted by Cemtec’s in-house laboratory, a detailed report created and provided to the customer. All samples were analysed for their particle size distributions and the finished cement also for its specific surface area (by Blaine method). The results of the test work showed high by-pass ratios for both currently produced cement qualities and consequently high optimisation potential. Figure 4 shows the resulting partition curve for one cement quality. The test results were used to confirm the process guarantee values, which were afterwards used for comparing the grinding plant performance before and after replacement of the separator.

The works in the plant started as planned at the beginning of the year 2020 with the dismantling of the old mill dedusting cyclone and the removal of the reject belt conveyor and cladding of the old separator building. All works were performed by erection company AGIS which is a subsidiary of Cemtec. After removal of the old cyclone and its piping the new dedusting piping from the mill discharge to the filter was installed. At the end of January most of the dismantling was finished and the construction of the new steel structure could commence. At the same time the assembly of the filter for the separator air circuit took place inside the mill building. For all these works three teams with at least three persons each were on site.

During the first week of March the reject air slide and slide scale were completed and small auxiliary equipment like fans and pendulum flaps installed. Installation work on the process piping, steel structure and platforms finished as well. One week later the process piping joints were welded shut and more auxiliary equipment installed. The second week of March also saw the start of cabling by the customer’s electricians in parallel to the mechanical work. In the third week of March, commissioning started with signal checks and start of first equipment, in parallel to further electrical work.

The erection could be finished with the completed installation of the separator feed system. The last week of March was used to finish the mechanical works with painting and cabling. The commissioning of the remaining equipment took until 10.04.2020 and was completed only two weeks after the planned date despite the start of the Covid 19 pandemic in the middle of the construction period.

In May of 2020, after some time to optimize and gain experience with the new plant, another sampling campaign showed that all guarantee values have been met. Figure 7 shows a comparison
between the finished cement product before and after replacement of the separator. As the diagram shows, the steepness of particle size distribution increased significantly.

In Figure 8 the partition curve for one cement type can be seen. The reduction of the global by-pass is clearly visible and nearly zero.

The replacement of the separator increased throughput by approximately 5% for one cement type and 12.5% for the second type, specific energy consumption accordingly decreased by 5.5% and 14%. All this was achieved at slightly higher Blaine values, so the effect would even be bigger at the comparable Blaine values.

REFERENCE
[1] Sgaslik, F.: Neue Erkenntnisse zur Sichtergestaltung. ZKG International 38 (1985) 1, p. 22-27
History of the plant
The customer Sebald Zement GmbH is a German family owned company with a long tradition of providing highest quality products to its customers in the region of Frankenalb. The company was originally founded in 1860 to produce quicklime from the limestone mined in the onsite pit. Before the turn of the century, they decided to switch the business to the production of cement, the quality of which gained the company a stellar reputation in the area. In the year 1969 the plant was rebuilt with a new mill in order to increase production and quality. Later in 1975, a first generation dynamic separator was installed in the cement plant, which was operating in open circuit before. Around 50 years later Sebald Zement decided to upgrade to a modern separator in order to increase production, reduce specific energy consumption and expand the product portfolio.
This article appeared in 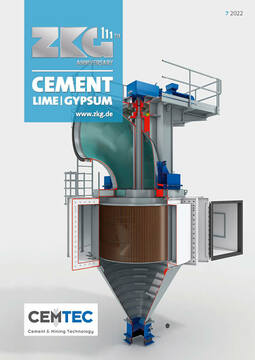 Cemtec Cement and Mining Technology GmbH received an order from Daesung Machinery Co. Ltd., South Korea, for the supply of main process equipment for the fine grinding of fly ash at 6900 cm2/g...

Since 2019, the new cement classifier at Kakanj Cement, a company of the HeidelbergCement Group located in the heart of Bosnia and Herzegovina, has been in successful operation. The Austrian-based...

After more than ten years of the successful operation of the Cemtec mill line No. 2, Ciment de Mauritanie SA and Cemtec Cement and Mining Technology GmbH have again signed a contract in 2014 for the...

In January 2014, CEMTEC Cement and Mining Technology GmbH from Enns, Austria signed a contract with LLC Stroytel´nye Materialy, a subsidiary of the German HeidelbergCement, for an increase in cement...

Gambia has decided for Cemtec

In January 2017, right after the newly elected president of Gambia came to power endorsed with the slogan Gambia has decided, Cemtec Cement and Mining Technology and Salam Cement Company signed...