For the 17th time, building material experts from all over the world met at the International Conference on Building ­Material “ibausil” in Weimar/Germany from 23rd to 26th September 2009 (Fig. 1). The Team from F.A.-Finger-Institute of Building Materials Science of the Bauhaus-University Weimar/Germany under the direction of the chairman Prof. Dr.-Ing. habil. Jochen Stark (Fig. 2) again assembled an interesting conference program in 2009. Thus, the conference has developed over the years to a constant on the building materials ­sector. During this year’s conference Dr. Stark’s successor Dr. Horst-Michael Ludwig (Fig. 3)
was introduced as the new director of the institute from 01.11.2009.

This year the organizers welcomed about 750 scientists and practical engineers from more than 40 countries for a lively exchange of ideas during three days in September (Fig. 4). In more than 300 special lectures the latest research results were presented to the participants, such as the ongoing problems of concrete durability, in particular the alkali-silica-reaction. The conference was accompanied by poster exhibitions.

New and specific test methods were presented in numerous lectures dealing with the topics inorganic binders, concretes and concrete durability as well as wall materials, conservation of structures and recycling. These methods allow better monitoring or clearer interpretation of many characteristic values of building materials. With sustainable development in mind, many lectures dealt with the application and mode of action of alternative binder systems. Among other things, this includes geopolymer systems or, in general, alkali-activated binder systems, but also new binder concepts, such as “Celitement” [1] and multimodal multi- composite cements (“M3K cements”).

Practically orientated topics were dealt with in presentations by top scientists from leading companies, such as Hochtief AG, ­Bilfinger Berger Bau AG, LAFARGE Zement, BASF, ­Heidelberger Zement Group, Dyckerhoff AG, E. Schwenk ­
Zementwerke KG, Knauf Gips KG as well as the Research Institute of the Cement Industry. Traditionally, many users of building ­ma­terials were represented at the ibausil. ZKG INTER­-
NATIONAL was represented with a stand in the accompanying exhibition (Fig. 5). The next ibausil will take place in ­September 2012. 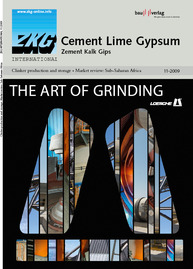