The farewell colloquium for Prof. Dr.-Ing. habil Jochen Stark (Fig.) took place at the congress centre “neue weimarhalle” on 17.06.2010. The university management, members of the institute as well as colleagues from the scientific environment met to pay tribute to the professional career of Prof. Stark and to put it in the context of the scientific topics dealt with during his term of office at the F.A. Finger-Institute for Building Material Science (FIB). These were topics such as “Scientific cooperation – an important part of successful research”, “From the fundamentals to practice”, “15 years of PCC research”, “Non-destructive testing methods” as well as the “Overview of the state of research concerning sulphate attack and hydration”. In his eulogy Prof. Dr. Horst-Michael Ludwig, Stark’s successor as director of the FIB, in particular acknowledged the activities of Stark at an interface between research and practice. After the lecture event the Russian version of the book “Alkali-Silica-Reaction” by Prof. Stark was presented. Prof. Krivenko from Kiev/Ukraine had translated and published the book that was written with the cooperation of D. Erfurt, Dr. E. Freyburg, C. Giebson, K. Seyfarth and B. Wicht. 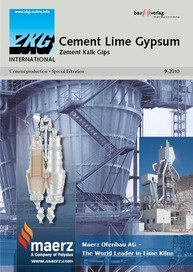 Future of building materials in research and practice

For the 17th time, building material experts from all over the world met at the International Conference on Building ­Material ibausil in Weimar/Germany from 23rd to 26th September 2009 (Fig. 1)....

In honour of his outstanding contributions to cement science and other relevant research areas and to celebrate Professor Glassers 80th birthday the Fred Glasser Cement Science Symposium was held in...

On 28.10 2010, Eric Wittmann, CEO of CEMEX Deutschland AG, handed over the award that includes prize money of 20 000  in the presence of guests from economy and science in the Hotel am Wasserturm...

Professor Dr. Valery S. Lesovik, corresponding member of the Russian Academy of Architecture and Construction Sciences, celebrated his 70th birthday on 09.03.2016. Dr. Lesovik is Professor for...