Since 01.10.2010, the company Ventilatorenfabrik Oelde has been represented in the Middle East by the Haver & Boecker subsidiary Haver Middle East in Ras Ál Khaimah (United Arab Emirates) in the  cement plants sector. The agreement was recently signed in Oelde between Ralf Dörner, Managing Director of Ventilatorenfabrik Oelde in Germany and Matthias Kügeler, director of ­Haver Middle East (HME). From now on, HME has taken charge of the interests of Ventilatorenfabrik Oelde in the countries of the United Arab Emirates, Oman, ­Yemen, ­Kuwait, Bahrain, Qatar and Saudi Arabia. “We are bundling our core competences,“ says Ralf Dörner while explaining the background behind the cooperation. Both Haver & Boecker and Venti Oelde often share the same customers. “And where that isn’t the case, then we both work to get a foot in the door,“ he adds. As a result of this new cooperation, Nonito Estrada, a HME service technician (responsible for the packing machine), has received training at the Venti Oelde plant. During the training ­Nonito ­Estrada learned about the design and construction of the ventilators and their use in cement plants. To ensure optimally balanced products, Venti Oelde for example invested in a new balancing machine three years ago (Fig.). Here impeller wheels with a diameter of up to 5 m and weighing up to 50 t can be accurately balanced. This is one of the machines on which the mechanic from Haver Middle East trained. He will be providing the technical expertise that he learned during his training at Venti Oelde to the Middle East. In addition, the technicians informed Nonito Estrada of all the necessary measurement values for the proper use of large-scale ventilators. 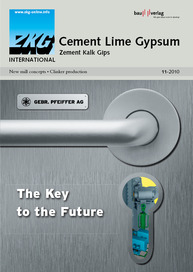 Challenges for plant manufacturers in the cement industry

How has the order situation developed in recent years  in view of global economic developments, but also with regard to the restrictions imposed by the Corona pandemic? Even long before the Corona...