At the anniversary celebration, the CEO Arthur Loibl thanked his family, all the present and former employees, the city of Straubing as well as all suppliers, customers and friends for their longstanding support and loyalty. “Without you, this success would not have been possible” he said. In 1960, graduate engineer Arthur Loibl founded in Straubing the company “Maschinenfabrik und Förderanlagen Arthur Loibl“. The firm was renamed “Anlagenbau und Fördertechnik Arthur Loibl GmbH“ in 1994. Today, Arthur Loibl GmbH has 110 skilled workers as well as, on average, 18 apprentices (in the professions design draughtsman, construction mechanic and cutting machine operator) operating in a production and operation area of 15 000 m2. Arthur Loibl was awarded two honors: The Chamber of Industry and Commerce Certificate in honor for the 50. Company anniversary and the certificate of assignment as a commercial judge (Fig.).

www.loibl.biz
This article appeared in 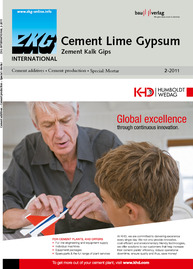 A company with long tradition up-to-date

In 1960 Dipl.-Eng. Arthur Loibl founded the predecessor of the present company LOIBL Allen-Sherman-Hoff GmbH in Straubing/Lower Bavaria, which continuously adapted its manufacturing engineering to the...

Over the last five years Mondis Bag Application Centre (BAC) in the Austrian Alps has established an impressive track record in testing and simulating industrial bags, as part of the technical...

Cooperation between Westphalia and Brandenburg: for the first time ever, a consolidated Environmental Statement by CEMEXs Beckum and Rüdersdorf cement plants has served as a basis for the voluntary...

Lords of the chains

Partnership with customers Together with two sister companies, the Heko Group manufactures steel round link chains, forged link chains, central chains and other accessories for conveyor systems at...

From locksmith to global drying technology expert in 100 years

For 100 years, the former locksmith and tinsmith workshop has been constantly developing new technologies in order to be able to offer the right equipment to an ever more diverse clientele. In dryers...