More than 50 years have passed since the first ibausil in 1964. These days, ibausil will be coming around for the 20th time. What makes this event so successful?

H.-B. FISCHER: The point of departure for the continuing success of the International Conference on Building Materials ‘ibausil’ is its commitment to Weimar’s building material tradition. Here, for the first time ever in the German-language area, students received training in a full course of building materials studies. Also, research facilities for the cement, glass and ceramic industries were located in Weimar and the surrounding area. This made for close ties between science and industry. Weimar’s central location in the heart of Europe also promoted contacts between East and West. I believe that our adherence to the traditional form of the congress while adapting it to current circumstances and trends has been quite beneficial.

As conference secretary, you organize the program. How long have you held that position?

H.-B. FISCHER: The responsibilities of conference secretary were conferred upon me at the 1987 ibausil, i.e., I have been involved in its organization since its tenth appearance more than 30 years ago.

More than 230 lectures and some 130 posters will be presented this year – a mammoth program! Which highlights are on the agenda?

The main idea is to pay more attention to sustainability in the future production and use of building materials. That is one reason why we decided to feature the Prof. Dr. Sobek overview lecture on the subject of “Building with less for more”.

Weimar is located in eastern Germany. Roughly half of all ibausil conferences held to date took place in the former GDR. Did scientists from all over the world already attend back then?

H.-B. FISCHER: Even before Germany’s reunification, ibausil had an international appeal. On average, roughly 20 % of the participants came from abroad. For one thing, we were already partnering with other congresses in eastern Europe, including for example SILICONF (PR Hungary), SILICHEM (CSSR) and CONSILOX (Romania). Various scientists from universities in the former Soviet Union (Moscow, Vilnius, Kharkov), as well as from Poland and Bulgaria, were permanent guests at our conference. We were also well received by colleagues from the Federal Republic of Germany: 21 West German scientists came to Weimar for the first ibausil in 1964, and 38 attended the 10th ibausil in 1988.

Yes, there was always a large number of participants. In 1973, 643 scientists and practitioners from 13 countries took part, followed by 400 from 30 countries in 1995, and on to 730 from 30 countries in 2006. The last event drew approximately 600 guests from 29 countries. How is attendance shaping up for your upcoming anniversary event?

H.-B. FISCHER: This year, too, we are expecting approximately 600 building material enthusiasts as conferees. As the conference’s program shows, a good 30 countries are sure to be represented. We are very well satisfied with the resonance regarding the “deluge” of technical gatherings, some of which are being commercially organized.

One of your goals is to bring together scientists from East and West. How much success are you having with that?

H.-B. FISCHER: By tradition, the majority of our foreign colleagues will again be coming from the erstwhile Soviet Union: Russia, Ukraine and Uzbekistan. This is due to long-standing contacts that have been reinforced via research projects. Support from the Humboldt Foundation and the German Academic Exchange Service (DAAD) has also had a positive impact on young researchers from those countries. That being so, Weimar offers “Western” companies in particular an excellent opportunity to gain insight into the present state of research and industry in the aforementioned countries.

The conference aims to promote the exchange of views and experience between science and practice. How has the proportion of practice-oriented presentations developed in recent years?

H.-B. FISCHER: Third-party funded research at universities accounts for a substantial proportion. This underscores our close cooperation with firms and companies. However, some such practice-oriented topics are of a confidential nature. This applies in equal measure to industrial research tasks. Consequently, the ever closer interlinkage of science and practice is, unfortunately, not reflected by the relative share of specialist lectures. Topics pursued by doctoral students are still predominant, so a broader resonance in the form of presentations from the industry really would be desirable.

Finding suitable young professionals is becoming increasingly difficult for companies. How can the F. A. Finger-Institute, as a training center and ibausil organizer, perhaps also promote close ties between students and the industry by way of this conference?

H.-B. FISCHER: Most of our graduates have no trouble finding an attractive, building material-related field of activity. In that sense, ibausil need not provide assistance. Unfortunately, it should also be noted that few first-year students nowadays are focusing on building materials as their major field of educational endeavor. As a result, the number of students has been stagnating at a low level for some time now. Unfortunately, that is typical for various engineering specialties. In my view, companies really need to become more involved in attracting students. That way, advertising campaigns on the part of university institutions would find more and better support. In my opinion, more thought should be invested in things like student grant contracts and scholarships for certain fields of study.

We are all in a state of digitization fever. In Luther’s days, the “printed word” was powerful, but now, Google is the place to look. So, can we expect a comprehensive proceedings volume again, and will you be sticking to it?

H.-B. FISCHER: Our conferees will once again receive a conference transcript in printed and digital form. On the occasion of our anniversary conference, we wanted to avow ourselves once again to this traditional but still up-to-date form of information transfer. Only time will tell where our journey toward the 21st ibausil will take us.

The next ibausil is scheduled for 2021. What do you think the topics of the future will be then?

H.-B. FISCHER: On that point, I fully agree with what Prof. Sobek said. We must all succeed in building sustainably with less material and immaterial inputs for a growing global population.

Dr. Fischer, we thank you for your interesting comments, and we wish you every success with the “ibausil”. 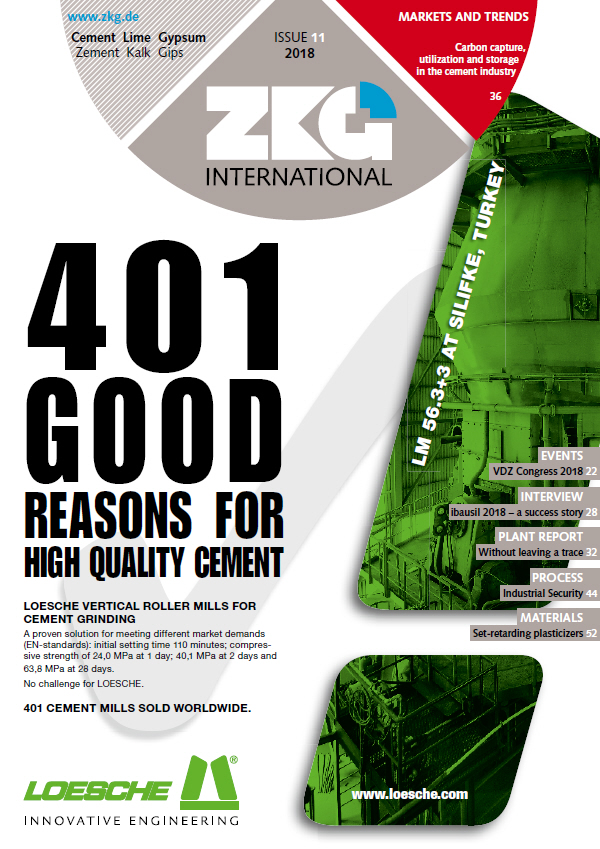 Welcome to ibausil, the 20th International Conference on Building Materials in Weimar

For the 20th time now, both researchers and engineers working in the industry will be meeting up in Weimar for the ibausil. Focus of this years conference is again traditionally the presentation of...