In May 2017 Aumund Fördertechnik GmbH won the order for three drag chain conveyors with capacities from 7.5 t/h to 200 t/h for discharge of limestone, gypsum and pozzolan for the new cement plant in Sherabad/Uzbekistan. In October 2017 an order for another Louise type Aumund drag chain conveyor for discharge of clinker dust rounded off the package.

The complete package being put together by Aumund Fördertechnik for the customer Almalyk Mining and Processing (AGMK) amounts, however, to more than 250 t of machinery. In 2018 Aumund Fördertechnik will supply to Uzbekistan no less than ten belt resp. chain bucket elevators with capacities from 21 t/h to 500 t/h, and centre distances between 16.6 and 120 m. The heavyweight of the delivery is the pan conveyor, with a centre distance of 148 m and a conveying capacity of 300 t/h for clinker. The clinker conveying system comprises two further Aumund pan conveyors with the same capacity but centre distances of 54 m and 65 m. There are also 19 silo discharge gates included in the package.

According to official sources, Uzbekistan would like to increase its cement production to 8.9 million t by the year 2020. The new plant in Sherabad is a major factor in this equation. From 2019 the intention is that cement production will run at a capacity of 1.5 million t of Portland Cement. 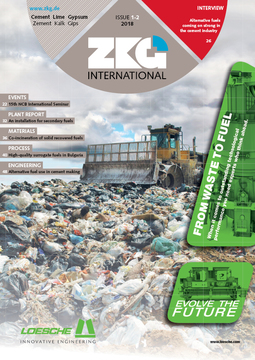 Aumund Fördertechnik is strengthening its share of the Turkish market. Çimsa Cimento has now ordered about 60 Aumund machines for the plants in Eskisehir and Ni?de. With five kiln lines in Mersin,...

Order awarded for Aumund machines at LafargeHolcim in France

LafargeHolcim is investing around ?100 million in the modernisation of the Martres-Tolosane cement plant in the South West of France. Aumund Fördertechnik GmbH and Aumund France S.A.R.L. will be...

Taiheiyo Cement Corporation, one of Japans largest cement producers, fires its new power plant in Ofunato with both biomass and coal. Until now conveying of biomass in Japan has been dominated by...

Bursa Cement: Into a green future with Aumund machines

Bursa Çimento Fabrikasi A.S. is upgrading its entire cement plant in Bursa to the latest technical standards in order to reduce CO? emissions and energy consumption to a minimum. The Turkish company...

Before the end of the year Aumund Fördertechnik GmbH, Rheinberg/Germany, will supply 41 machines for a new kiln line at the Medcem Madencilik cement plant in Silifke in the Turkish province Mersin....