Within the scope of its expansion projects, PT Semen Indonesia, the country´s largest cement producer is building two new production lines at its premises in Rembang and Indarung VI. Claudius Peters has been awarded the contract for the delivery of seven cement bagging lines including the following equipment: bucket elevators, moving screens, feeding via aeroslides, pre-bin, packing machine type R8ZL, automatic bag applicator and bag discharge equipment as well as filter systems, spillage return transport and control of the complete plant. The delivery is scheduled for autumn 2014 and spring 2015. 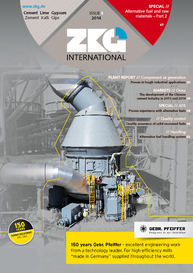 Claudius Peters has received an order for a new cement storage silo and packing plant in Baturaja/Indonesia (Fig.). PT Semen Baturaja, a fully state-owned cement supplier in the south of the island of...

The Spanish consortium consisting of Messrs. Sacyr Industrial and Imasa Ingenieria y Proyectos awarded another contract to Claudius Peters for the delivery of a packing and palletizing system for the...

The Spanish consortium, Ute Oruro, awarded a contract to Claudius Peters Projects for the delivery of a new packing and palletizing plant for a new cement plant in Oruro/Bolivia. Ute Oruro consists of...