At the beginning of 2013, the Taiwanese Fu-Tai Engineering Co. awarded a contract to ­Claudius Peters for the delivery of two Claudius Peters packing lines including the following equipment: vibrating screen, level indicator, rotary feeder, eight spout rotary packer with a capacity of 2400 bags/h for 50 kg bags, bag applicator cassette, bag discharge belt, bag cleaning station and control PLC/MCC. The two packing lines will be installed at a grinding plant located in Ciwandan, Cilegon City, Indonesia for PT ­Cemindo Gemilang. PT Cemindo Gemilang is a member of PT Gama Group and one of Indonesia’s growing companies which focus on the cement industry. They are in the process of building a 10 000 t/d clinker plant, the first largest plant throughput in Indonesia. The grinding plant together with the two packing lines will be supplied by ­Fu-Tai Engineering with start up for the two packing lines being planned for October, 2013.
www.claudiuspeters.com
This article appeared in 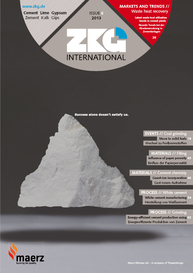 Within the scope of its expansion projects, PT Semen Indonesia, the country´s largest cement producer is building two new production lines at its premises in Rembang and Indarung VI. Claudius Peters...

Tokyo Cement Company (Lanka) PLC has signed a contract with Claudius Peters Projects for the supply of a rotary packer Pacpal Roto Fill for their plant in Sri Lanka. Claudius Peters scope of supply...

The Spanish consortium consisting of Messrs. Sacyr Industrial and Imasa Ingenieria y Proyectos awarded another contract to Claudius Peters for the delivery of a packing and palletizing system for the...

The Spanish consortium, Ute Oruro, awarded a contract to Claudius Peters Projects for the delivery of a new packing and palletizing plant for a new cement plant in Oruro/Bolivia. Ute Oruro consists of...